The Hanson-Young vs Leyonhjelm grudge match has me shagged out already ...

It's prolly about a week ago now that David Leyonhjelm told Sarah Hanson Young to "stop shagging men" to make a rhetorical point in the heat of battle in the Senate. Amazing how it's all blown up since.

Maybe I've missed something, but as of this blogging I don't think SHY has yet actually cried "havoc!" and let slip the dogs of law. She's done a lot of huffing and puffing about it though.

Now I'm no "legal eagle" (not even a beagle). But IMHO by upping the tanty Hanson-Young has made a massive tactical error. Firstly, she is accusing him of "slut-shaming". Well, he never used that derogatory term. (So funny that prior to playing soundbites during his appallingly unprofessional lambasting of Leyonhjelm on their ABC, tragic SHY fanboi Hamish Macdonald issued a trigger warning. But that was clearly more for the word "slut" than "shag".)

Also, Leyonhjelm is Canberra's official "freedom dude". He doesn't think (alleged) mad rooting is bad. So how can he be "shaming" her by using Austin Powers' funny euphemism? 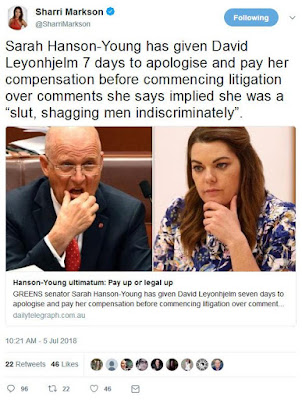 His conduct in the chamber was not edifying, sure. But it was no more offensive than what other pollies routinely get away with.

He was basically calling out hypocrisy because he thought he heard her blame men collectively for rape. And given her form on this subject, it's entirely plausible that's exactly what she did.  (He may have misheard her, sure. But it was a retort, not unprovoked bullying as the fake news-peddling MSM would have you believe.)

The exchange was akin to a pollie known for investing in the banking industry saying "bankers are crooks" and another calling him out by saying "well take all your shares out of Westpac then!" No one would say this was "investor-shaming" would they?

Anyhoo, why is "stop shagging men" sexist, as SHY and all her haughty supporters claim? It's not gender specific because men can shag men, too. Calling it sexist is actually homophobic, innit?

Then there's all the misandrist abuse that's been hurled at Leyonhjelm. Take this classy contribution from Catherine King on Q and A.

Hamish Macdonald was moderating that little jawfest. He didn't pull her up on it, of course. And imagine if any male pollie had said something similar about King herself?

Then there was Virginia Trioli on the 7:30 Report calling him "bitchy" to his face. Again, if a male journo said that to Hanson-Young? He'd be punted from Ultimo within the hour, and would prolly never work in mainstream media ever again.

Trioli is sooo annoying; such a lightweight. Tries to look all sassy and formidable but hides behind her gender ... And it's revealing that Charlie Pickering the "comedian" on The Weekly (fricken weakly, more like) was most impressed by that interrogation. He called it a "mauling". FFS, only a pussy would think that!

Then, in a massive own goal he sexualized Trioli by joking that she could have taken a "post-carnage selfie" with the male senator, a clear play on the word "coital". Now, as any victim feminist worth her salt would be aware, he was invoking "vagina dentata" imagery. Deeply, violently misogynistic!

Dude is so dim he was clearly unaware of this faux pas. Neither was the airhead Trioli herself, since she hasn't arced up about it. She prolly would though if someone pointed it out to her, and there was a lynch mob she could join ...

Hmm. Maybe I should pose as one of the Twitter trollective, get Jenna Price et al on board, and beat up a campaign against the show: "Quick sisters, organize a girlcott!"

But back to the stoush itself. The sulking soy boys, white knighting wankers and fulminating frightbats of the MSM have all piled onto this big time, thinking that most people in Oz are taking the side of the poor St Sarah, who's had her virtue so violently violated by Evil Lord Leyonhjelm.

FFS, what a joke. I think most Aussies can see that it's a massive beat up. And this tweet confirms my suspicions. 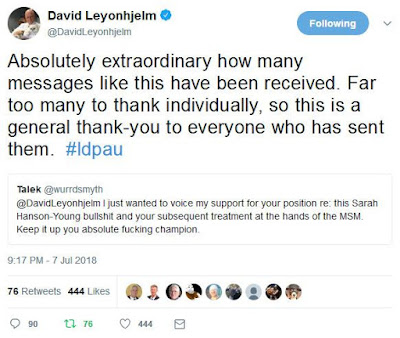 Both he and his accuser have started crowdfunding campaigns in preparation for the looming battle. I got the screen shots below at the same time yesterday. I thought it was interesting that even though SHY has received more money, she has a far larger support base. Think of all her fellow travellers in the meeja, and the professional activists doing her bidding. Must be squillions of 'em!

As well as being numerous, they're a highly cashed up demographic (professionals, etc). Yet they've clearly donated less per person than those who did for her so-called abuser. Interesting. 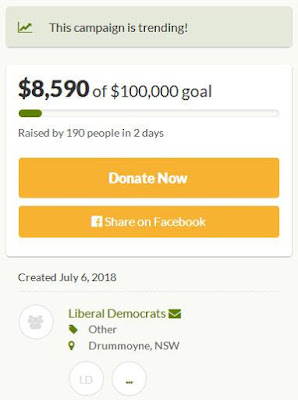 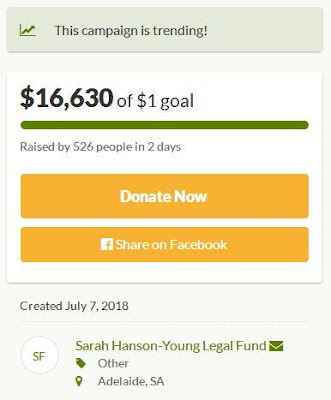 Well, I dunno what happens next. But it will be interesting to see how this all pans out.

I'm all for Leyonhjelm standing firm against the putrid tidal wave of abuse from SHY, the PC political establishment, and the rest of the Sanctimony-Hectoring Complex (otherwise known as the MSM). Even if he loses legally, he'll still win by refusing to apologize.

That's because the PC Left are all about dominance. The vicious collectivist bullies are going all out to shame this guy into backing down. Like the Maoists with their show-trials, they absolutely must make dissenters recant and show obeisance. In social justice, subordination must occur, and be seen to occur. Only then can they instill fear in the rest of the population. Fact that he won't do as he's told is making them lose their shit big time, and it's glorious!

Anyhoo, given the ribald nature of the term that sparked this whole episode, I thought a limerick was the best way to sum it up so far:

A "SHY" young Hanson named Sarah,
Once claimed the word "shagging" did "scare" her,
While that Leyonhjelm dude,
Like Austin, was crude,
Her threats were clearly an error!

Posted by MattHaydenAU at 7:52 PM