Boys will be boys ... and lefties will be lefties

It's obvious that PC narratives pushed by those at the commanding heights of popular culture can be yugely influential. They really do have the effect of brainwashing a helluva lot of people.

And they don't just stupefy. They can actually provoke highly obnoxious and antisocial behaviour -- even violence.

And here's a small but I think significant local example. In the wake of the rape and murder of Eurydice Dixon lefties in general and feminists in particular have been pushing the asinine, misandrist "all men are to blame" angle. This is hardly surprising, of course. Their whole ideology is based on lies.

Predictably, this bogus interpretation was thrashed on a recent episode of Q and A. Check out the very first question below. It was obviously chosen by the producers to echo the PC line that any act of violence perpetrated by an individual male is ultimately the fault of masculinity and to say anything else is blaming the victim:

JACINDA FERMANIS: Thanks, Tony. I suppose following the events of the last week or so, and in terms of the longer form narrative around the safety of women, this was important to me to highlight that, not only myself, but I feel I can speak on behalf of many women that we do have situational awareness, we do carry our phones home with us in our hands, we do carry our keys like a weapon and we are, in fact, aware of our surroundings, and yet, we are followed, we are stalked, harassed, abused, raped and, in this instance, murdered.

So to suggest, you know, the situational awareness narrative needs to continue is nothing less than victim-blaming. The only other step we could take as women would be to simply stay inside, curtailing our own lives massively and even then, we would still be in danger because of the mass amount of women who are abused and harmed by the men within their homes. Voices of authority should be condemning the perpetrators, not the victims, in this case, and every case that should follow. Unfortunately, they will follow. Is this the murderous version of “boys being boys”, and what is the solution?

On cue, countless Aussie frightbats on social media echoed this sentiment. Though consistently daft, Jane Caro is certainly accomplished at summarizing her toxic ideology in tweet form. She did so here, drawing a direct line between the widely used phrase "boys will be boys" and rape and murder. 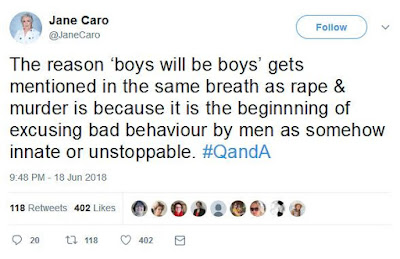 So silly. The phrase is frequently invoked regarding unedifying blokey antics and bad behaviour including womanizing, sure. But I've never in my life heard any man (or woman) use it to seriously excuse rape or murder. The only times I can recall this particular association being made it was in feminist -- sorry, fear-menist -- propaganda, and some right-on flicks.

But as with all right-on bollocks the aim is not to be factually correct or morally right. It's to push a victim narrative. The goal here is to make women hate men, and men hate themselves. And if this results in public acts of stupidity or damage to a business' profits and reputation, well, bonus!

And that's exactly what happened here. 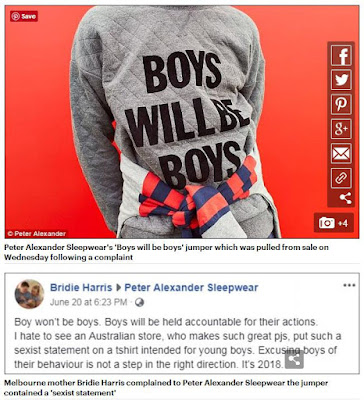 Pretty clear that this idiot was "inspired" to do this by the social media chatter about the "dangerous" phrase "boys will be boys" cited above. If not, why hadn't she arced up about this jumper before?

These people are amazingly stupid. They actually get instructions on what to be outraged about from their cultural Marxist "thought leaders".

You may have heard the term "weaponized autism". Well, this is a case of weaponized cretinism. It's something the PC Left just can't survive without.
Posted by MattHaydenAU at 12:50 PM