Sure I'm not alone in being utterly disgusted by the way the usual suspects have pounced on the horrific rape and murder of Eurydice Dixon to push their treasured anti-male PC narrative.

Started immediately after the plods found her body and called a press conference. Because they exhorted women to take precautions, swivel-eyed frightbats from Sydney to Perth squawked up a storm, accusing them of "blaming the victim".

FFS. Saying "be careful out there" is not "blaming the victim". It's just good advice. In a perfect world terrible events like this would not occur. But it's not a perfect world. It's a dangerous place. Always was; always will be. So you should act accordingly.

In the subsequent days they've cranked out radical anti-male propaganda that has been truly alarming in its scale, intensity and shamelessness. Sure, the Left aren't the only ones who exploit crimes for political purposes. If the killer were, say, a known predator who was out on the street when he should've been in jail, it would've been politicized also. That would've been unedifying, but understandable. But in this case the campaign has been purely ideological.

And it has definitely not been spontaneous and organic. Looks very much like the malignant muppets currently waging it had their whole strategy well prepared in advance. They sat around keeping their powder dry, then when they heard about this particular murder they gave the launch order: "Blunderbirds are GO!" They are as sick as they are cynical.

The whole campaign is being waged right across the media, mainstream and social. Most ol' codgers like myself can see it for the big lie that it is and laugh it off. But it's gonna cause psychological damage to many younger folk of both genders (and yes there are only two).

It's been going for days already and they'll continue to flog it for the last ounce of toxic misandry they can, no doubt. But here are two examples from the last few days. 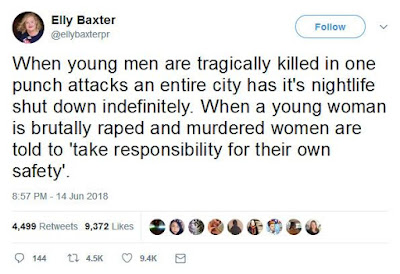 Oh, gawd. Where to start ... An entire city? Indefinitely? So OTT it qualifies as BS. Also, coward punch killers often get off lightly. Thomas Kelly's got 4 years for manslaughter ... And cops don't only tell women to stay safe. They are flat out finding and apprehending killers, too.

And check out Elly's replies under the main tweet. 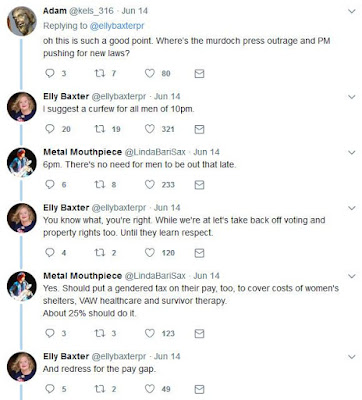 So she wants a curfew for all men. Okay. How to enforce it? What, buncha beefy babes gonna go out on "penis patrol" -- sans guns of course, because I'm sure she's against them too -- and say: "Now, now, home time, testosteroids. It's after ten!" Good luck with that one, sisters ...

I doubt even Elly would be that naive. I think she might really prefer armed males patrolling the streets, arresting all the civilian men for breaking the curfew -- which of course negates her daft idea anyway.

And notice how she then jumps to demanding men be banned from voting and owning property! And from there she switches to another feminist obsession, the (mythical) pay gap.

So, she's gone from crying crocodile -- sorry, dial-a-crock -- Twitter tears about male violence against women to demands that all men be denied a slew of basic rights.

This is irrefutable proof that Elly Baxter doesn't give a rat's clacker about the victim of this horrific crime. She's just using the murder to push her totalitarian ideology. 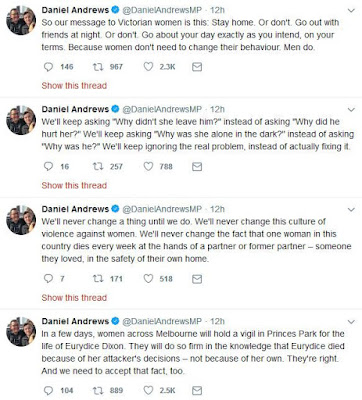 Notice how he says "we". That's revealing and says something about his character -- or rather, lack thereof.

Male feminists often repeat the "all men are bastards" lie, implicitly (or explicitly) including themselves. This means that they know it's bollocks but go along with it to fit in, advance in their careers, or maybe even just get laid. That makes 'em misogynist cowards.

The other possibility: they know what dirty dogs they themselves are and assume all blokes are much like them.

He's obviously a coward, because if he were serious about changing "male culture" he would tackle the widespread union thuggery in his state. If your average CFMEU-run building site isn't a breeding ground for "toxic masculinity" I don't know what is.

In any case I doubt that Dan himself even wrote those tweets. I suspect he hired someone more trained in the practice of peddling politically correct cant. You never know, maybe Badham or Ford, or even Caro was called in (and paid big bucks, natch) to make sure the misandrist message came through loud and clear.

Which is why I'm calling him Van Andrews from now on ...
Posted by MattHaydenAU at 12:57 PM