So only PC LGBTQIA+ folk can cry "homophobia"? Sounds like discrimination to me!

Something that becomes clearer with every passing day is how divisive and toxic political correctness is. And the reason it has this effect is not because of an excess of zeal -- you know, pathway to hell, etc -- but because being toxic is its actual intention. It's classic "divide and conquer", and conquering us is the ultimate aim of the totalitarians at the top of the power pyramid.

The mistake many people make is to confuse the muppets with the, er, muppeteers. Magda Szubanski, and so many activist members of the LGBTQIA+ community (and what a bollocks term that is, just as the "heterosexual community" would be if people decided to invoke it) are sanctimonious and annoying. But in the end they are just useful idiots for their calculating cultural Marxist thought leaders.

Non-hetero slebs like Magda have been brainwashed into thinking that they're oppressed by society. M'kay ... If she's so oppressed, and our society is so "homophobic" then how'd she become so successful, admired, and I suspect wealthy in the first place?

Being one of the anointed, she feels that only she and her fellow woke folk get to use right-on terms of condemnation. Below is her response to a torrent of abuse after she liked a mean-spirited tweet by Marcia Langton (who has form on this sort of thing BTW) basically claiming that a self-described gay conservative couldn't be both. He only thought he was gay, she tweeted, because "he masturbates too much". 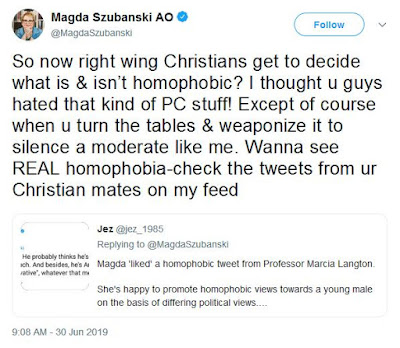 What's amazing is how she not only denies that the tweet itself was homophobic, but she then goes on to cast herself as the victim. I don't doubt that much of the reaction she got was nasty and abusive (which should always be condemned of course) but a lot of it was completely justified criticism of her obvious hypocrisy. Still, in classic SJW style she didn't show any humility or maturity. She just doubled down instead.

You really couldn't get a clearer example of the rules of political correctness. Magda clearly implies that the term homophobia (hatred and fear of homosexuals) is only to be used to describe righties, especially Christians. So it's a term to sledge political opponents, not protect sexual minorities. Which makes it just another one of PC Left's deceitful labels along with Islamophobia, climate change denialism, misogyny and toxic masculinity.

The line is that PC leftie gays and lesbians, etc, just can't ever be guilty of homophobia, even when they are. But if the same standard cannot be applied across the board, then how can equality ever be achieved? And isn't that what PC LGBTIQ+ activists say they want?

Well, clearly not. They just want the power that comes from constantly claiming they are ... powerless. And they just can't see the irony. That's because they've been so completely indoctrinated by cynical control freaks into demanding special rights, and thereby sowing social discord. It suits the anti-Western, pro-globalist, cultural Marxist leaders to have such prominent "victims", even when, like Szubanski herself, they are nothing of the sort. On the contrary, they have clearly long had the world at their feet. Sad!

But it's not just leftie atheists who pile on with the very selective condemnation of political opponents. Many woke Christians do too. Take their ABC's Julia Baird for example. 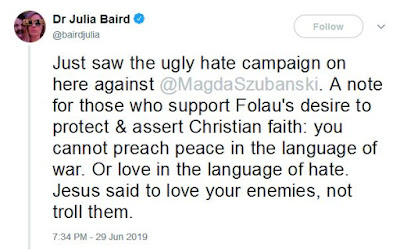 By focusing on the hate that people have expressed (rather than the valid criticism of hypocrisy) she manages to sidestep the issue, and merely repeat the same tactic of applying standards only when it suits the PC Left's divisive, misery-causing agenda. If Ms Baird sincerely believes her own talk, then why doesn't she condemn Langton for the obvious hateful abuse that provoked the mean tweets sledging Magda?

I suspect she would say that's because Ms Langton is not a Christian (AFAIK). (She's prolly also wary of being labeled racist, since the same double standard applies regarding that issue as well.) But would she refuse to condemn right-leaning atheists for the same thing? Of course not.

See, Ms Baird is still doing what the sanctimonious hectoring woke folk always do: ignoring the ugly hate on her own side. That makes her just as much of a fool and a muppet as Magda herself.

And she must know how such brazen hypocrisy enrages people -- particularly when they also have to pay for it (by funding the ABC). Which I suspect is a big part of why she does it. That also makes her a bit of a troll, which she explicitly condemned in that very tweet. Not very "Christian" of you, Jules!

Unlike Israel Folau himself, who's remained restrained, dignified and forgiving throughout (even if, IMHO, he was wrongheaded). His original post was inclusive because absolutely everyone was on the "hell list". It was also loving, because he wanted all those "sinners" to be saved.

He repeated Ms Baird's exhortation. And coming from such a goodhearted place, he thereby improved upon it greatly.

How ironic is that? After all, it was Folau's so-called "hate" that started this big ugly ball of of right-on virtue-signalling and putrid leftie abuse rolling in the first place ... 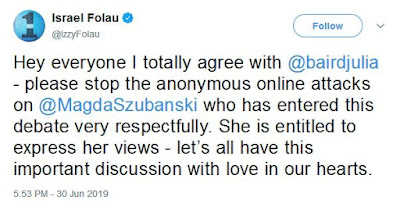 Posted by MattHaydenAU at 3:01 PM