Now we all know that PC lefties suffer from arrested development. Emotionally, they are like spoiled brats. They think that everything is all about them and their precious feels. And they reckon that when it comes to issues of social justice only they care; that anyone who disagrees with them must be a heartless hater. So they're always falsely accusing others of the intense disdain that they themselves feel for their political opponents. In short, they project.

You see this all the time on Twitter. Here's an absolutely perfect example of it: After reading a typically dishonest Guardian gargle about Mark Latham -- which itself omitted key facts about why the ex-pollie and current cant-buster was criticizing the Bankstown Poetry Slam -- prominent Indigenous academic Marcia Langton expressed her wish that he die a "slow, painful death". 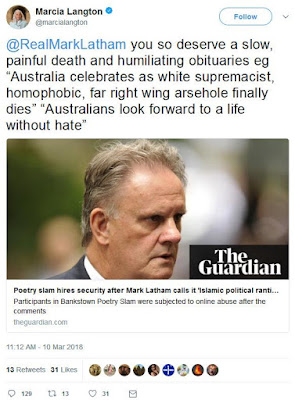 It was just amazingly mean-spirited. What's even more astonishing is that she described him as the truly spiteful one -- implying that his death would erase hate -- in the very same tweet!

Upon reading it any sane, reasonable person would think: "WTAF is going on in this poor woman's head?"

Even some lefties woulda looked at it and said: "Yeah, not nice ... Still, Latham had it coming. He's a hater, no doubt about it."

Sure, Latho can be vitriolic and aggro. And he'll give as good as he gets -- and then some. But I've never known him to actually, seriously wish death upon someone else. Which is clearly what Langton did here.

Even more gob-smacking is the fact that she left the tweet up for quite a while -- a coupla days I think ... It is gone now, so maybe someone had a quiet word to her. Or perhaps she slowly realized how foolish it made her appear.

Still, the level of loathing in the tweet -- not to mention lack of judgement it demonstrated -- is a worry. And there's zero chance she'll suffer any negative consequences for it, of course.

You only have to contrast the professional immunity she enjoys with what happened to Professor Barry Spurr, who resigned from the University of Sydney because of the almighty ruckus over some off colour private e-mail correspondence that was meant to be humorous.

And people wonder why so many uni students are tragically right-on zombies these days. Yeah, well. Go figure.

You don't go to uni to "learn" any more. On the contrary -- "unlearning" is all the rage (rage being the operative word, clearly).

Posted by MattHaydenAU at 11:06 AM