I'm not really into sport of any kind these days. And I've never been one for cricket. So I haven't followed this whole ball tampering scandal very closely.

Still, given the intensity of the minute by minute media coverage of this still unfolding story, along with the public's reaction to it, it's clear that Aussies not only absolutely love cricket and its culture, they also take the issue of cheating extremely seriously.

This is strongly related to the Aussie cultural obsession with honourably observing agreed upon rules. You've gotta be fair dinkum everywhere, especially the sports field!

Obviously other nations take the issue of fair play in sport seriously too. But they don't seem to be quite as obsessed with it as we are here.

That said, it seems to me that while what the players did was wrong and they should've been punished, what they actually copped from TPTB was massively OTT. And the gleeful mainstream and social media pile-on has been disturbing, to say the least. 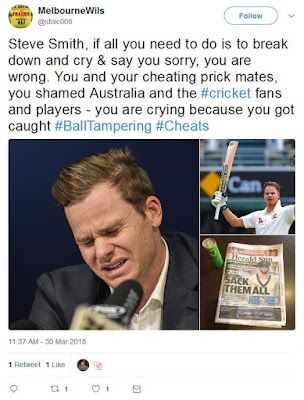 As with so many things these days, a major component in this whole scandal is the current obsession with identity politics. When the story first broke there were heaps of social media updates about how this kind of cheating was so typical of "white male privilege" and an example of "toxic masculinity". 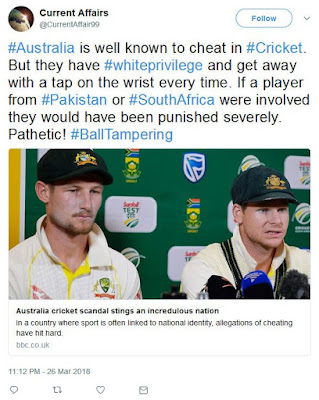 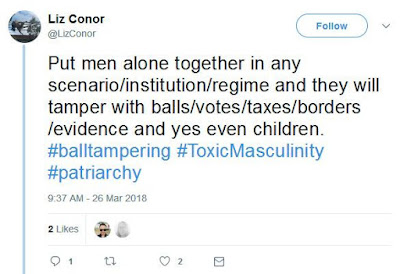 I suspect that officials in Cricket Australia got wind of this infantile wailing by brainwashed tweeps and Facebookers and thought: "Yikes! The whole nation is out for blood. We'd better come down hard or we'll be called raaacist as well ... And that of course is the absolute worst thing in the world!"

So they did. And even when the punished players cried very real tears of shame and remorse many of the same lefties baying for their blood were not satisfied and kept kicking, or gloated at their ability to have such a devasting effect.

Even now in some of the seemingly less judgemental MSM commentary on the fallout from the ball tampering scandal, the same child-brained obsession with "toxic masculinity" remains.

The whole sorry clarsterfark is yet another example of people in positions of power believing a false narrative pushed by the PC Left and acting accordingly. They've really gotta start ignoring these arseholes and their nasty tactics or every institution is doomed, no kidding.
Posted by MattHaydenAU at 12:08 PM