Nothing that your local leftie luvvies love more than sneering at "rednecks", particularly ones from Queensland -- or the "deep north" as they like to call it.

I always find their use of that particular term kinda funny. It comes from America, after all. Given that they routinely confuse countries with cultures, isn't that a clear case of "cultural appropriation"?

Anyhoo, you often see this progressive racism on Twitter. Earlier this week, for example, Julian Burnside QC indulged in some of it during Q and A.

Take this cheap shot, in which he sneeringly mocks Pauline Hanson's accent. 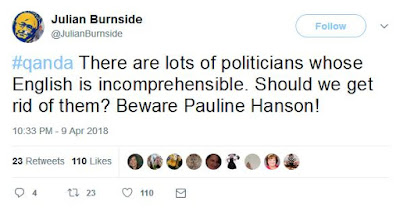 Explicitly ridiculing a person's speech is cruel because it's something they can't change. It's like making fun of someone with a stutter or a lisp. Not a good look generally. And it's made worse here because this guy is forever fobbing himself off as "Australia's Most Compassionate Man".

And it's so classist! Because Ms Hanson doesn't speak with the clipped elegance of the eminent Melbourne Queen's Counsel and his tertiary educated ilk, he enjoys making jokes at her expense. Like so many of the latte Left, he is basically an elitist snob. Ol' "Crown Jules" really oughta check his privilege.

He's also not the sharpest pencil in the box (or should that be the "loudest gavel"?). Earlier on, he tweeted this about Ms Hanson: 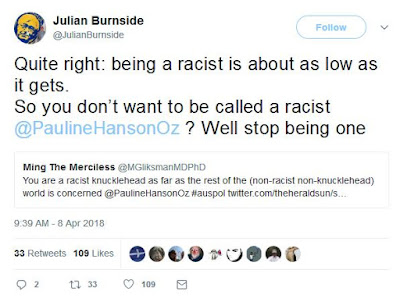 A question for my "learned" friend: Mate, if Pauline Hanson's accent is so, er, boganistically "incomprehensible" to your oh so delicate ear, then how the fark do you actually know that what she's saying is genuinely "racist"?

Crown Jules cranked out more unwitting comedy as Q and A wore on. He asked this question about plods' uniforms: 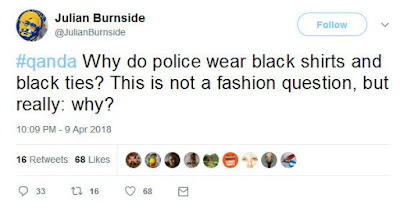 I'm now living in Sydney, so I'm not sure what exact hue the Victorian constabulary's clobber is. Several helpful tweeps suggested that they wore dark blue, not black.

In any case, I don't think it's a stretch to conclude that this was another example of Crown Jules' rather worrying tendency to see fascism everywhere. (There was that notorious recent retweet of his about Peter Dutton, remember.)

Seems his febrile, luvvie mind was bubbling with images of jackbooted goons employed by the state to stamp out dissent with extreme prejudice. (So funny, because if the Victorian Police are reminiscent of another force it's not Mussolini's blackshirts, but the the Keystone Cops!)

If you think my conclusion is OTT then check out this other tweet of his:

Not to mention completely and utterly wrongheaded: Like all regressive lefties, Burnside is gullible enough to think that Parkland shooting sleb David Hogg and his teen team of avenging angels are actually the real deal!

Sooo obvious to any sane, rational adult that they are actually the mere puppets of wily Democrats and fellow "liberals" way older and more powerful than they are. Hogg is definitely more deserving of the "Nazi" tag than Dutton could ever be. 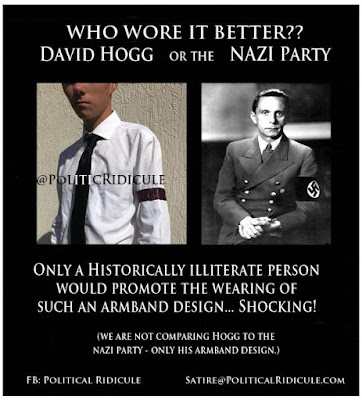 As that other -- far more intelligent and well informed -- Aussie Julian remarked, zealously pushing for gun control is a hallmark of fascist regimes across the globe. 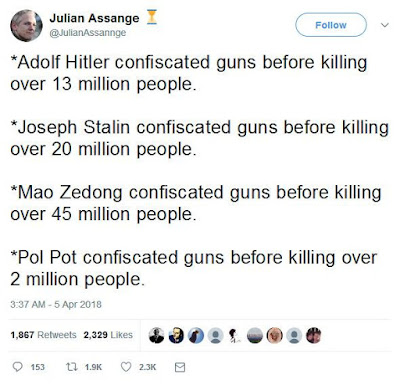 I think I'll be calling my favourite latte leftie Julian Blindside from now on ...
Posted by MattHaydenAU at 12:12 PM