Thing I find fascinating about regressive lefties is how emotionally driven and tribal they are. Defending the side and not the principle is par for the course for these muppets ... So deep-seated are these psychological forces that many prominent, capable professionals often act in amusingly daft and incoherent ways as a result. And here's a good example of this from Twitter:

Julian Burnside QC is obviously getting severely stressed by the constant criticism and attacks on him on social media. So he came up with the idea of compiling a shame list of right-wing trolls to put on his blog. 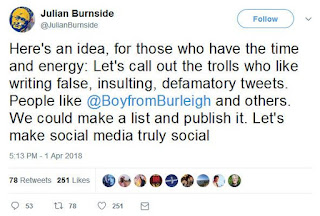 Lefties love this kind of stuff, natch. Collectivists to the core, they really get off on demonizing, discrediting and disqualifying their opponents en masse -- just as they love to assemble with scores of their smug fellow travellers and congratulate themselves on how fricken "compassionate" they are!

These days, being "progressive" is all about feeling superior to the rest of humanity. They are the most grotesquely elitist snobs you can imagine ... The fact that they then have the gall to claim they're actually egalitarians makes you wanna burst out laughing and barf at the same time!

Then there's their massive double standard. Trolling is practised right across the political spectrum, of course. But for vicious online abuse, lefties have gotta be the worst. Just look at their infantile insults under any tweet by a conservative commentator or pollie and you'll see what I mean.

And it's a bit rich for Julian Burnside himself to be calling out trolls when he recently tweeted this about Peter Dutton: 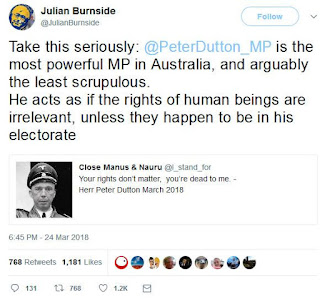 Now I doubt that qualifies as defo. Tweeps have a lot of leeway when sledging pollies, it seems. Political speech is routinely hyperbolic, after all. And the targets tend to have much thicker skin than most. (Dutto in particular seems not only rhino-hided but pangolin-skinned and armadillo-amoured as well!) That said, I seriously doubt that many high profile business figures would be so legally indifferent to such an outrageous insinuation.

In any case that tweet is certainly trolling by any reasonable definition. While Burnside was merely retweeting the Nazi image, he was certainly endorsing the comparison. And he did tag Dutton, who would have seen it for sure.

Not surprisingly, Burnside copped a helluva lot of criticism for that particular tweet, as he describes here.

Pretty clear that butthurt over that condemnation was a big part of his motivation for compiling the troll list. Such a typically leftist reaction, that. Rather then contemplate his own actions and accept that the tweet was beyond the pale (especially for a prominent player such as himself) he doubled down and said "look over there!".

So determined was he to shame his attackers and critics that he put out a call for help to compile this list: 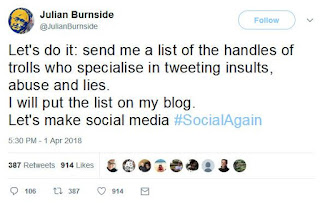 Not surprisingly he got an enthusiastic reaction from his febrile following of leftist losers. Predictably, they were listing pretty much anyone they disagreed with as "trolls".

To his credit, Burnside actually tried to narrow the definition: 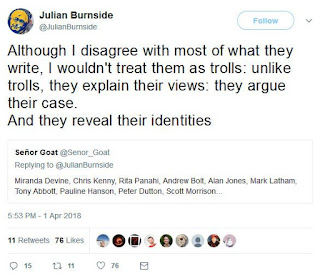 Hilariously, prominent Burnside fellow traveller Vanessa "Van" Badham offered assistance with her block list -- which prolly contains about half the Oz Twittersphere. Soon after, some of Burnside's own -- very "progressive" -- supporters complained that they were actually on it! 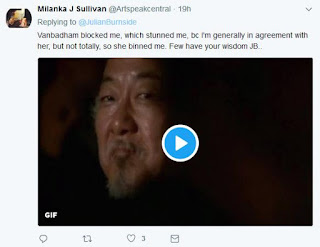 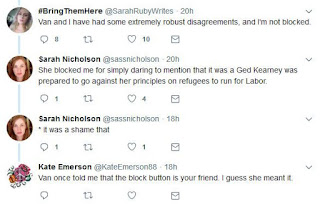 Clearly Badham thinks they qualify as trolls, or something similar. And if Burnside values her judgement then he should include their handles in his list, shouldn't he?

Or maybe not ... Looks like ol' Julian's got some sortin' to do!

Such a microcosm for the Left, this. They crave a pile on so deeply that they inevitably end up making fools of themselves.

In any case Burnside is pressing on with his project. The first installment is up now.
Posted by MattHaydenAU at 1:41 PM