Julian Burnside is beyond parody

Recently, Julian Burnside fell for a parody account of Malcolm Roberts. And it's not the first time he's made such a silly mistake. Late last year Crown Jules was fooled by a similarly fake tweet, this time purportedly by Donald Trump. 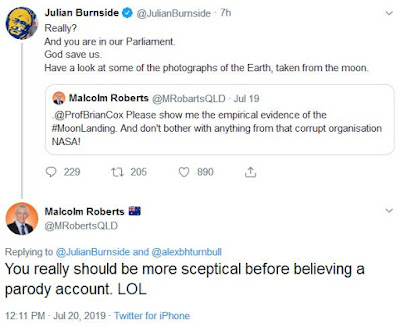 Burnside did accept that he was in error regarding Roberts, but grudgingly. In doing so he revealed exactly why he made it, while remaining none the wiser. 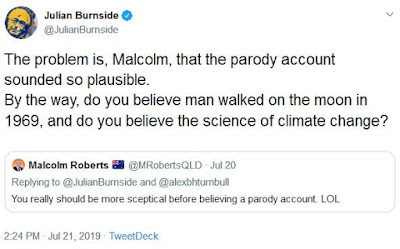 This was a classic case of confirmation bias. Emotionally committed to the whole idea of catastrophic climate change, he simply cannot accept that the theory is driven much more by politics than science. So in his mind anyone who questions it must be a moron or a bad person, or both.

Putting feelings over facts, Burnside can't see things rationally on this issue. I doubt he would ever do that in his profession, which he excels at.

And aren't legal eagles always meant to know what someone's answer to a question will be before they put it to them? That's why asking Roberts if he believed in the moon landing was another error. It was very easy for the senator to say of course he did in a subsequent tweet, thereby making Burnside look even sillier.

As if this was not embarrassing enough, Burnside retweeted Adam Bandt's push to have the nation officially declare a "climate emergency". So daft on many levels ...

Apart from the obvious fact that the world is in no such state, even if it were there's nothing we as a nation could do about it. Even if we stopped all fossil fuel usage today, we would have next to no effect on the (non) problem. 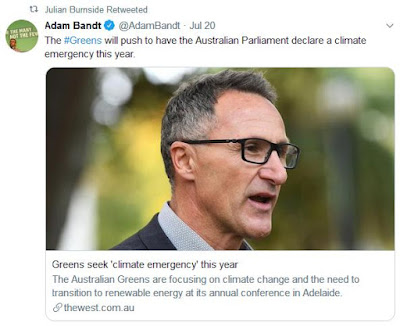 So why encourage people to panic -- especially children? The likely answer to that is what I find most disturbing.

When people are stressed out they can be more easily manipulated. So, if you create that state of high anxiety you can then gain far greater social and economic control of the masses, all under the pretence of "helping" them.

IMO those at the top of the warmist pyramid are shameless liars who well know that there's no "climate crisis" but peddle the AGW bollocks because it's a crucial part of their plan to centrally control the world's economy. But I think that many people below them (such as Burnside himself) have bought the lie. That's why they make the kind of confirmation bias booboos detailed above.

Even then I think their commitment to it is more about moral vanity than anything else. Strangely, they actually kind of enjoy spouting all the gloom and doom. By melodramatically warning the normies about the impending apocalypse, they can feel like they are noble planet-saving heroes ... Interesting how the thing that upsets them most is being told the world isn't gonna fry in a coupla decades, innit?

This "climate emergency" push is basically an exercize in political narcissism. Clover Moore has declared one in Sydney to make herself and her fellow travellers feel extra-spesh. But it's pretty obvious she doesn't believe it on a genuine, selfless level. If she did, she'd be focused on the climate issue alone. She'd have no time for other projects such as NAIDOC in the City -- itself another excruciating example of virtue signalling.

Posted by MattHaydenAU at 11:35 AM