Who is smarter, Julian Burnside or Donald Trump?

Dunno about you, but I find it astonishing and hilarious that the most committed Trump-haters haven't yet figured out that he's actually smart as. Despite all the evidence to the contrary, they keep insisting that he's just a gross, narcissistic fool.

Hell, you'd think that they would at least question that assumption from time to time. If they did, they'd contemplate the fact that he first had to crash the Republican Party to win the nomination, then take on the Democrats and Hillary (who all the pollsters and pundits were saying had an unassailable lead right up until election night), not to mention the entire mainstream media. He still won, and he's been battling all those powerful forces and many others since.

He's also at war with the Deep State who obviously want to kill him and almost certainly have tried more than once. Yet while doing all that, he's still managed to turn the entire US economy around, denuke the Norks, and do a shitload of other cool stuff besides.

But the usual suspects cling to their hateful stereotype more tightly than ever! Still, I shouldn't be surprised. Being essentially child-brained and emotionally driven, PC lefties tend not to look at cold hard evidence in any field they wish to influence. They are terrified that it will confound their utopian narrative which revolves around them as society's most enlightened, good, kind, compassionate and intelligent citizens.

Which is why they continue to beclown themselves over Trump ... Take these comically revealing tweets from local luvvie Julian Burnside, for example. Firstly, he falls for a fake account because it confirms his dim view of POTUS. Then when he twigs it's a joke he doesn't readjust his thinking, or even delete the tweet. In classic SJW style, he doubles down instead. 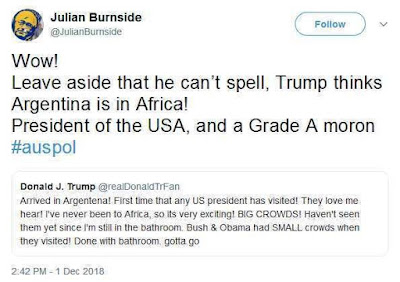 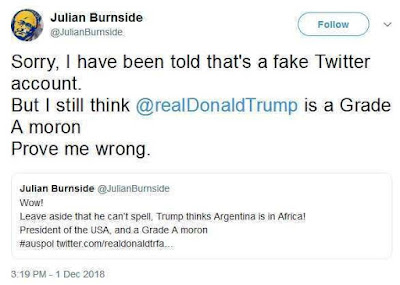 It's hilarious. Those tweets are still up there too, BTW. He obviously hasn't yet realized how stupid they make him look.

And I say "look" because I don't believe that he himself is a moron. Hell, he can't be! He's a high profile barrister with an impressive track record. He's clearly a competent professional who can process a lot of information and construct a convincing narrative to sway a jury.

That's because in a professional, legal context he's more dispassionate about things. He's not in the grip of a powerful emotion, so his intellect comes to the fore and he can apply his skill and knowledge to the task at hand.

But when it comes to Trump, he's all over the shop! He's triggered emotionally, see. Hurty fee-fees cloud his thinking and he becomes Julian Blindside instead.

This IQ-lowering process happens to countless other PC lefties across the globe. Which is actually by design. See, Trump has been carefully developing and honing this brash, buffoonish image for many years so that he can leverage it when he needs to. If he wants to distract his haters while he achieves something significant behind the scenes, he'll say something particularly outrageous, or send out a tweet storm chockas with spelling and grammatical errors (which also double as code for supporters but that's another story entirely).

His repeated mockery of "Little Rocket Man" was a fine example of this. He had all his MSM and political enemies in conniptions over those tweets, thinking he was gonna provoke a nuclear war! But in reality he was making deals with Kim Jong-un who was almost certainly in on the joke.

And he's been doing a lot of outrageous social media stuff lately. Take that retweet of the meme showing many of his foes including the Clintons and Obama behind bars. As a result, serious sufferers of Trump Derangement Syndrome like our Julian see vivid confirmation of their dim view of him and vehemently express their disgust and disdain.

Meanwhile, with these people all jeering, sneering and pontificating he's getting all sorts of amazing stuff done. And believe me, amazing is the right word. It's gonna make what he achieved with North Korea seem mild in comparison. In coming months, maybe even weeks, I think almost everyone is gonna be yugely blindsided, not just Julian and his fellow travellers ...
Posted by MattHaydenAU at 7:57 PM