As I've mentioned before I live in the inner west. It's left-heavy, and the woke residents certainly make it known. There are heaps of posters around the place telling you about the joys of communism, feminism, gay marriage and all the rest.

The people who create these exhortations are clearly not too bright. But I'm actually kinda fond of them because they are so funny. And each of them seems to encapsulate one or more aspect of the mind virus that is political correctness itself.

Take this poster near Petersham Station. 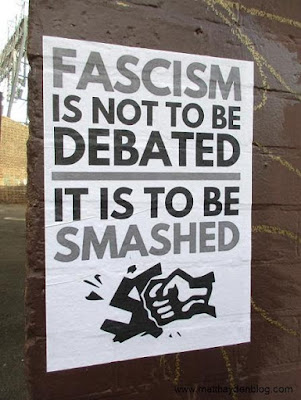 If you're a drooling idiot you might think that this is a completely reasonable proposition: "Hell, we all know how evil those fascists are. Why should we listen to anything they have to say? They want to enslave all the good folk so surely it's entirely reasonable to beat the crap out of them ... Violence is bad of course; we'd never inflict it upon peaceful people. But those fascists -- they're askin' for it, aren't they!"

But if you are even remotely capable of critical thought you'd be alarmed by that poster. First question that comes to mind is: Okay, but what do you define as "fascism"?

And when you look at the Left and what they arc up about it's pretty clear that they attach that label, along with Nazism, to almost anything that doesn't agree with their top-down centralized view of how society should be run.

They think that words are literally violence so they feel completely justified in using real violence to shut people up. Can you think of a more clear example of psychological projection, manifested politically?

And I love the image of the clenched fist hitting a swastika. Says so much.

I don't think I have ever seen any Nazi symbols ever displayed proudly by any Australian group. I'm sure they are out there, but their numbers are clearly vanishingly small. 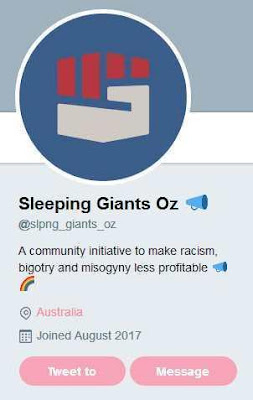 But that clenched fist symbol? You see it all the time, usually associated with leftish causes. Take the "Sleeping Giants". These woke wankers aren't capable of arguing their case, and they find anyone with an opposing viewpoint deeply threatening.

Antifa members assemble in packs to intimidate venue owners and managers who host critical, non-PC ("fascist") speakers as a way to get them no-platformed. And in a more restrained but still sinister way Sleeping Giants exhort their dopey acolytes to use social media to harass advertisers of TV shows deemed guilty of wrongthink.

It's still "smashism", and ugly as all get out. And the fact that this kind of online bullying is encouraged and even carried out by so-called "academics" is truly alarming.

If these muppets had any sense of self-awareness they would realize they far more closely resemble the "fascists" they condemn than their opponents. But sadly the cancer of PC has rendered them incapable of independent thought. In most cases it's an incurable condition.

That said, it's good to know that there are a growing number of people aware of this tragic irony. And we can still laugh at the smashists' stupid antics in the meantime. So, there's still hope yet!
Posted by MattHaydenAU at 12:05 PM