Haven't really followed the lead up to the appointment of the new Governor General. So I don't know anything about this David Hurley dude ...

Still, given he's a member of the PC Left's most despised demographic, not at all surprised at the uproar it's caused on social media. Usual suspects are of course going spacko because he's not gay, female, trans, Muslim, furry, otherkin, or otherwise victimized -- though, given his military background I think those who identify as narcoleptic albino attack helicopters might not be entirely displeased.

Also predictable was the reaction from the mainstream media. Many activists masquerading as journalists were a tad shat off about Hurley's appointment, like dopey Ginny here: 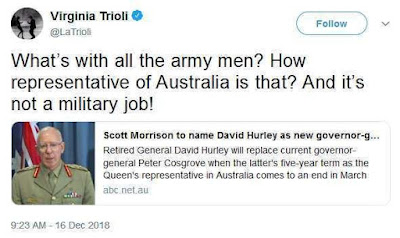 As at least one eagle eyed tweep pointed out, the role of GG does entail being Commander in Chief of the Australian Armed Forces. So, blokes in uniform makes perfect sense -- if you're not a sneering child-brained muppet, that is.

Most of her fellow leftie luvvies were more diplomatic, employing the ol' bob each way, "yes but no" line. Take the tragic serial white-knighter PVO. 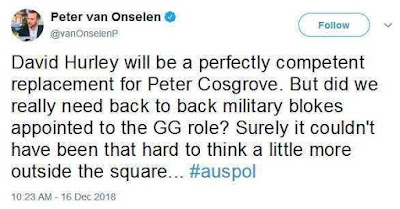 Pretty funny coming from Perfessor Pete. As well as refusing to take his own advice, check his own "white male privilege", and hand his gigs to someone more deserving, he's wedded to the whole idea of gender quotas and just can't escape the PC thought prison. (Also, I think PVO forgets we've already had a chick in the role recently -- Quentin Bryce, remember.)

Then there's this from Doctor Baird -- for a doctor she is (hat-tip: Hendo). 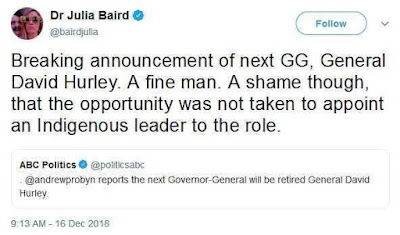 I'm sure Julia is a fine woman, too. A shame though, that the opportunity was not taken by the ABC to appoint an Indigenous thinker to the role of host of The Drum. I reckon someone like, say, Anthony Dillon would be a vast improvement on the current one, don't you?

And what significant development in Oz politics would be replete without the sage counsel of the former Chief Finger-Wagger of Goodthink Central himself, Tim Soutphommasane. 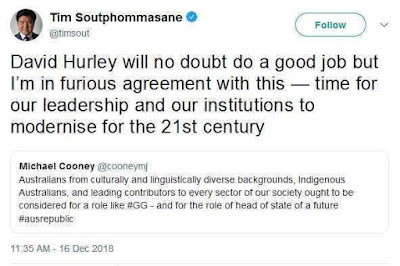 Yeah, he's flogging his #BeyondThePale hobby horse, as per usual. Contrary to MLK's truly wise advice, he exhorts us to place characteristics like ethnic identity over inner qualities such as character and ability.

But then he seems to do a backflip in this retort later on when -- in a textbook example of psychological projection -- he implies that merit is actually a thing, and an important one at that. (Of course there's no way known that Tim himself got his gig at the HRC due to the "diversity lottery"! No, not at all. It was all down to merit in his case, obviously.) 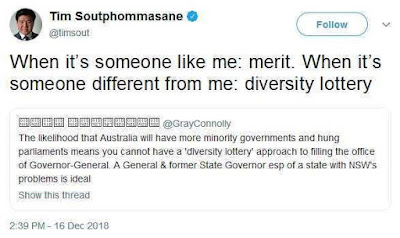 Er, you can't have it both ways, Tim.

But then, that's what the PC Left are all about, right? Like the pampered sprogs they are (and remain their entire miserable lives) they always wanna "have their cake and eat it too". It's the rest of us who have to pay for their privilege.
Posted by MattHaydenAU at 4:41 PM