I know it's only smock and troll but I like it!

One of the most impressive things about President Donald J Trump is that not only does he own his foes with such ease and frequency, he does it with such amazing panache. He is not only making America great again. He's making politics yugely entertaining for the first time!

It's this showmanship that was instrumental in him getting elected POTUS back in 2016 against such yuge odds. And it's what helps him maintain momentum as he drains The Swamp and humiliates the fake news MSM on a daily basis.

His Twitter trolling is prolly his most effective tool in this regard. His most outrageous tweets perform several functions at once: They trigger liberal crazies, give sane adults a chuckle, and constitute cryptic signals to supporters and enemies alike. Take this recent tweet in which he used the phrase "smocking gun". 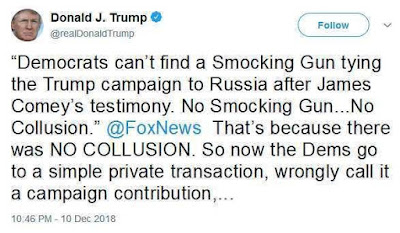 Countless Trump-haters saw it as more evidence that he's a complete moron, natch. Verified twats across the globe piled on with their sneering social media updates, not realizing that he was actually using them to get his message across to the normies.

Take this update from this blue check loon. He actually notices that the hashtag #SmockingGun is trending but doesn't twig to the ramifications of this. It means that a helluva lot of people are looking at the tweet, and it's being reported in the MSM. So the point POTUS makes in it -- that he's not guilty of Russian collusion -- is reaching millions more people than it would have done otherwise. 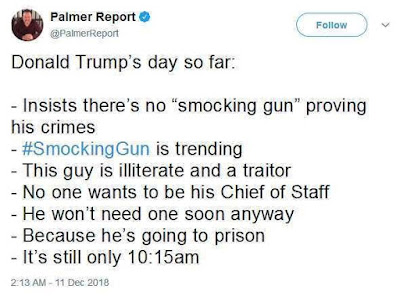 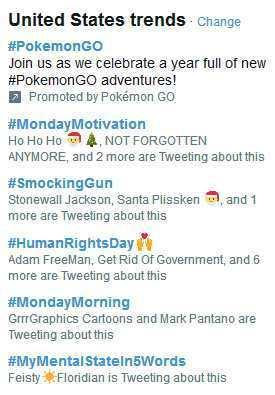 Trump knows that his haters have fallen for the cartoon facade of the boastful oaf that he's carefully constructed over many years. They simply cannot pass up an opportunity to show all their credulous fans how much smarter they are than he is.

Comic Zach, who you'd hope would be much smarter, stops thinking the moment he sees evidence that seems to confirm his dim view of the man.

Braff and his fellow leftie slebs have fallen for Trump's trap. He's triggered their emotions so they don't use their intellects (not that those are exactly powerful when they are employed).

If you're a thinking person viewing Trump's tweet, however, you'd quickly realize the spelling "error" was intentional. Firstly, he's quoting from an article by simply cutting and pasting it. Highly unlikely a journo would make such a boo-boo, so he must have changed it on purpose.

And even if you thought he typed it word by word, and can't spell "smoking" then you'd prolly search for the word elsewhere in his feed to test that hypothesis. Then you'd see that yes he can spell it, because he used the term "smoking gun" correctly only a coupla days before, again in the context of claims of Russian collusion. 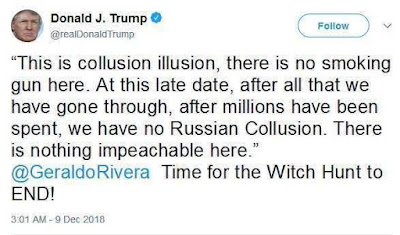 Which would then provoke you into wondering why he would do this. And that's the second function of his zen-level trolling. He's basically getting his supporters to focus on this "crumb" and engage in their own speculation about what's really going on, since the MSM narrative on his presidency is absolute bollocks and we all know that.

I have a coupla theories on why he chose the word "smocking". Firstly, he's making fun of the Deep State-controlled MSM itself. He's saying that by pushing the bogus Russian collusion narrative, the Mockingbird Media has made a smockery of itself.

And I think he's implying that while they have only a (fake news) "smocking gun", he has the real "smoking gun" showing how it was actually the dirty Dems who colluded with the Russians on Uranium One.

The "error" might also be a reference to the anti-Macron "yellow vest" protests in France."Smock" is often used to describe a protective work garment, after all. (Sure, this could be too long a bow -- or too loose a vest -- but it's certainly possible.)

And remember that the Smockingturd Media is lying about the extent and cause of that massive unrest. They are saying that it's all about fuel taxes. But the motivation is much deeper than that. 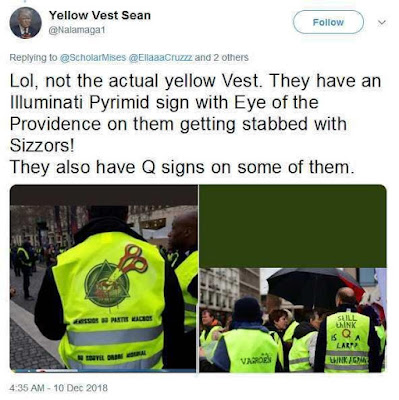 As the above photos attest, the protests sweeping France and other European nations are against the globalist Cabal more generally. Also, many of the protestors are part of the "Q Movement", which the MSM is desperately trying to portray as a batshit "conspiracy theory".

Obviously it's anything but. Just as I'm postulating thoughts and theories about the tweets of POTUS (otherwise known as "Q+") so do countless "autists" on 8Chan and similar sites. It's a democratic process, a Socratic dialogue that encourages free thinking, not a top-down, prescribed narrative. And that's what terrifies the globalist elites. There's a great awakening occurring worldwide and they can't stop it no matter how hard they try.

Which brings me to the last aspect of Trump's use of trolling: gaslighting and threatening of enemies.

This is something both sides do, of course. Take James Comey's sinister allusion to assassination in this tweet. 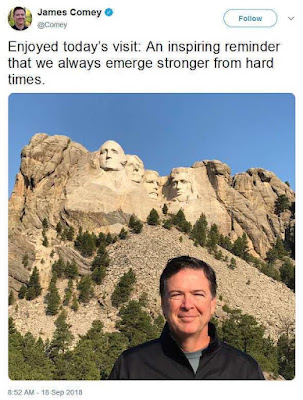 Notice how he's positioned directly under the statue of President Lincoln? Gee, I wonder what he was suggesting there. Can't possibly imagine ...

In a comparable way I think Trump coulda been sending a coded threat to his enemies by inserting a "c" into the word "smoking." And intriguingly, he did it twice. There has been an exhaustive investigation into the Clinton Foundation, the findings of which were scheduled to be tabled on the 5th of December. That was delayed by the George HW Bush funeral, which was clearly not a coincidence.

Word is that this comprehensive Clintonoscopy has uncovered evidence of gargantuan corruption, and worse. Maybe some of it specifically relates to Chelsea Clinton herself and POTUS was hinting at this in his tweet?

Well, time will tell ... One thing's for sure. Trump's tweets will keep his squillions of supporters across the globe thoroughly entertained and speculating up a storm, just as his foes go crazy with the stress!

What a legend.
Posted by MattHaydenAU at 4:57 PM