Another funny poster caught my eye. I saw this one just yards away from the one I blogged about recently. There are so many of these all over the inner west. The actual messages they contain reveal the daft mindset of their creators. And they can seem doubly absurd given the context.

Obviously this one is from a far leftie or anarchist. But while it's not a highly creative work of art, it's still quite neatly designed. Whoever created it put some effort into it. So, even as he was saying "fuck work" he was, er, working.

That's one of the great rewards of work, of course. It's not just an economic activity as commies would have you believe. It's about the satisfaction and meaning you get from a job well done. 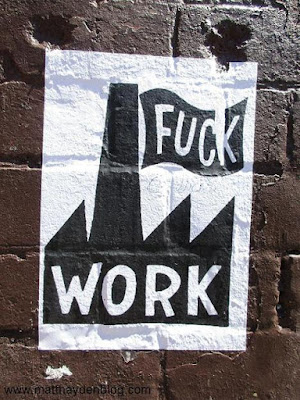 That said, there is also the possibility that the person who created this poster had no emotional investment in its message. Maybe it was just a one off gig for him -- even if he received no money for it and just got, say, a coupla free beers down at the Townie on King Street.

If that were the case doesn't that make the person who asked for it his boss? There was clearly a hierarchy of power there. However briefly it existed, surely it was counter to any good leftie's sincerely held beliefs about equality.

Then there are the raw materials used to make the poster. That white paper and black paint was produced in a factory somewhere. Wouldn't be able to make that point had there been no one working there.

Then there are the bricks of the wall, which were skillfully placed and cemented together by hard-working blokes many decades ago. And I'll bet those dudes, who are almost certainly all dead now, took great pride in building such a long lasting structure.

I could go on. But I think you get my drift. Work is all around. It's about much more than money. It's an indispensable part of life in so many ways. And these petulant, sneering muppets just reject the whole concept outright.

Imagine how childish and entitled you'd have to be to think they had something to offer.

Gawd.
Posted by MattHaydenAU at 11:35 AM