The Jeffrey Epstein arrest is absolutely yuge in so many ways. The scumbag rock spider is connected to numerous powerful pollies, squillionaires and slebs. They are all surely packin' their dacks, and bigly!

The story is more relevant to Americans than Australians for obvious reasons. Still, it's a massive development given the context of Trump's war against the globalist cabal and the deep state. If the local MSM were dinkum non-biased truth seekers it would still be one of the top stories here, with many details included.

But all I saw yesterday in the main two dailies (Daily Tele and Herald) were brief items on pages 19 and 20 respectively. Below is the one from the former. 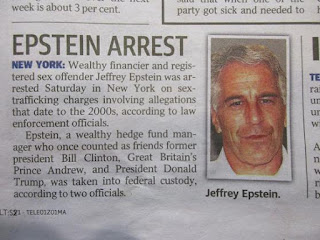 As you can see it mentions Bill Clinton and Trump together as pals of the pedophile. It makes their links to him seem equivalent. But this is not the case at all.

But you can be sure that right across the spectrum the local MSM will maintain the false equivalence for as long as they can. That's because the same factors that cause a preponderence of fake news in the USA are at play here too, just not as pronounced.

Below is a much more accurate depiction of what's going on. 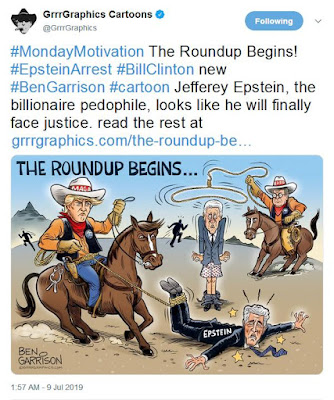