It's war: coronavirus cure versus vaccinations

Just learned that in an effort to halt the rise of coronavirus there's a ban on gatherings of more than two people, and you can't leave home without a reasonable excuse such as work, exercize, or shopping.

All this for a flu-like illness that's supposed to have come from bat soup, and which has killed less than 20 people in Australia so far (and even that figure is suss because fatalities were mostly old and frail folk with other illnesses, and you can die with an infection but not necessarily of it)?

No way. There's clearly something else going on here. And whatever it is, it's fricken yuuuge!

So here's a very colourful metaphor to explain the current craziness. It's pretty cray-cray in itself, which seems appropriate:

Basically the whole world has long been a sick circus. We normies have all been trapped inside a yuge tent, watching an endless Punch & Judy puppet show (political Right versus Left). We've been brainwashed into believing it's all real. 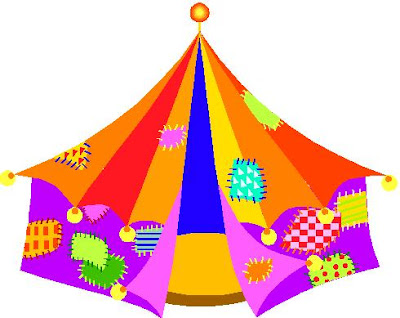 We mill about, interacting according to rules made by puppet masters in a pod attached to the flag on the big top. This Cabal of evil clowns (think Pennywise and extended family) are invisible to us. They've run this circus for ages, having all kinds of depraved, ghoulish fun at our expense. And the vast majority of us believe the fictions on stage, which are also displayed on the tent's interior by the MSM (which of course the clowns control completely).

But now a Blackhawk helicopter has parachuted Trump into their midst. He's currently beating them to death with their own clown shoes (size COVID-19, natch). The chopper blades keep spinning up a storm and the big top is starting to collapse. Yuge rips are appearing in the canvas and the long deceived circus-goers are beginning to see swathes of blue sky en masse.

If all goes well, soon it will all fall apart, with countless normies escaping into true reality, slowly coming to grips with the enormity of the diabolical deception they've lived through. Most people will, eventually, run away from the circus! 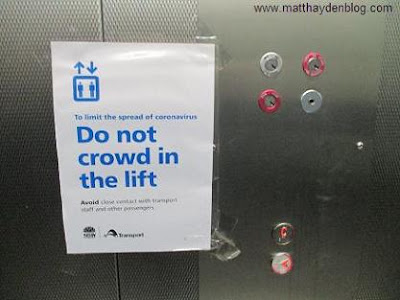 Notice how Trump keeps saying that we are fighting a war. And I have heard ScoMo use the same metaphor. That's interdasting rhetoric when the issue is "public health", right?

Seems to me that they're talking about something other than coronavirus. And they're telling us they're on the same side.

Remember how Trump held that lavish Whitehouse dinner for ScoMo, and said he was "made of titanium"? Why would you say something like that unless you saw major battles ahead and wanted a loyal ally?

Also, notice how Trump, ScoMo, BoJo and other leaders are telling us to follow expert advice, use social distancing etc. And above all, stay calm.

Yet the MSM are doing everything they can to scare the crap out of everyone with their whining about mixed messages from leaders, mass death scenarios, and front page photos of medicos in hazmat suits. 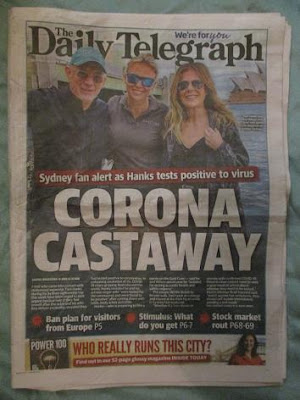 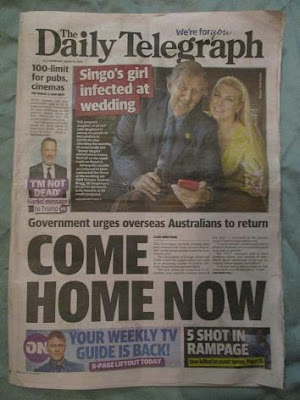 They've been flogging the fact that heaps of stars and slebs have mysteriously caught the virus (and how suss is that in itself!).

This bizarre adrenochrome angle on why so many have COVID-19 is intriguing as. It may be true for some. But I reckon most are lying as part of a yuge globalist Cabal psyop. 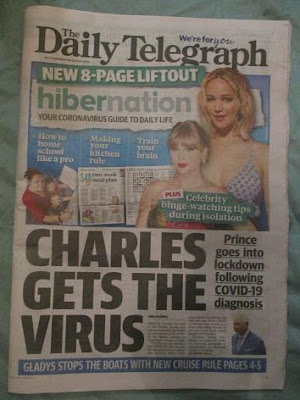 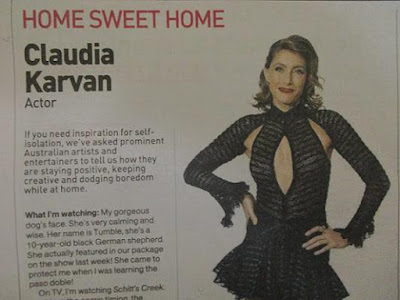 Notice also how famous folk have been recruited into a highly organized campaign to help guide the normies through the crisis -- not with facts but feels, natch. Both The Daily Telegraph and the Sun Herald have dopey, narcissistic slebs telling us what they're doing, eating and watching to pass the time in isolation.

These people are almost all puppets, just better looking than the Punch and Judy pollies. (Politics is showbiz for ugly people, remember.) Sometimes they're made to get "angry" and shriek "Orange Man Bad!" or "Where the bloody hell are ya SmoKo?" when required.

Now, amid this "pandemic" they're utilized for the purposes of distraction. Of course they're being authentic, and are genuinely "here to help". Puppets don't know that's what they are, after all. They're just glad for the publicity. But they're clearly part of a highly organized system of mass mind-control.

And the MSM crank out brazen lies of ommission and commission as they always do. I mean, FFS, you just need to do the math to see what a load of bollocks most of their stories are.

Take the fact that a high percentage of coronavirus "victims" are a flu's who of the global elite including Prince Charles and Greta Thunberg.

Really? Seriously, what are the odds ... Those who "caught" the bug here include Tom Hanks, Rita Wilson, Richard Wilkins, Singo's daughter, along with pollies Andrew Bragg and Dutto. I'm sure there are others.

If that many extremely well known people have the China Virus then surely a high proportion of the Australian population do as well. And if it's dangerous enough to justify all these safety measures, where are all the corpses in streets? 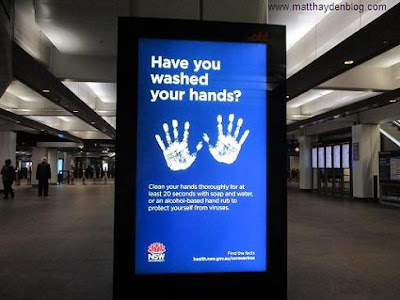 FFS, if only a bit over 10% of Aussie citizens were infected that'd be near 3 million. If just 1% got really sick that would mean 300000 needing hospital beds. And tens of thousands would have carked it already.

The entire health system would've collapsed from the stress of this. And we would all know of people who died and got really sick. It'd be like hell on Earth!

But nothing like that has happened. Yes it's a dinkum virus (that came naturally from bats -- yeah, suuure!) but the global measures taken to combat it are insanely OTT.

And this international lockdown movement is clearly not primarily driven by governments. It's a top down psyop by the globalist Cabal and the Deep State like the "Climate Emergency" was, only far more intense and immediate. They're throwing absolutely everything they have at it!

We know this because the local MSM robodolts are all using it to bash ScoMo like they did with the fires. (Also, notice how those relentless, all pervasive predictions of planet-ending catastrophe in 12 years have been completely dumped in favour of this new viral panic. Another clear sign of centralized, global, top-down control.)

They're obviously tryna fast-track us to the NWO. Control freaks love AGW because every human has a carbon footprint. And they are pushing this "virus emergency" because we all have blood. For AGW the control mechanism is carbon tax, emission reduction targets, etc. And for COVID-19 it's forced vaccinations.

These people are sick, not us ... They can leverage the economic and social chaos they are causing to hurt Trump, ScoMo and other patriotic leaders. And they use the widespread fear as an excuse for introducing mandatory vaccinations, cash free economy and similar measures. They want Australia to be a place where everyone is controlled and tracked, and everything is automated by a massive AI system. It's Orwellian as. 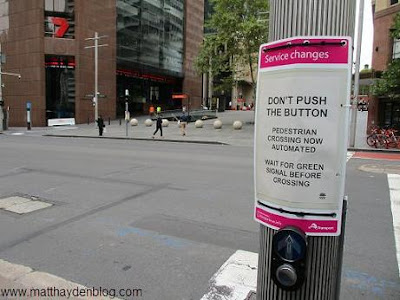 So, the global "war" going on is not between humanity and bug but between globalists and nationalists, and killing coronavirus is the goal. Whoever succeeds wins the crown, so to speak. Globalists push vaccinations while patriots seek a cure.

Control freaks love vaccinations because they get to put their creepy chemicals (and fark nose what else) into your body and you can't say no -- all for your own good, natch. A cure is the choice of those who want freedom because it's only used if you've caught a disease.

This is why POTUS talks up Hydroxychloroquine. Thankfully, it has just been approved by the FDA. 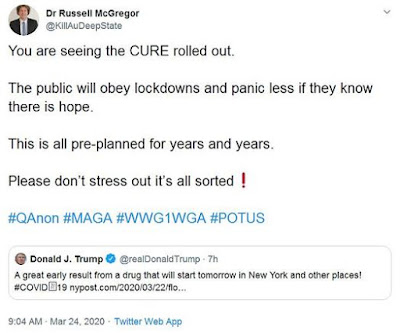 Expect ScoMo to follow suit here, with much resistance from the local MSM. But if he takes a different route and opts for mandatory vaccinations from the likes of Bill Gates then we'll know he's not "made of titanium" after all, and that he either wussed out of The Storm or betrayed POTUS. This is extremely unlikely IMHO.

There are many reasons I have this view, including the fact that some high profile globalism supporters here have quit in recent months. 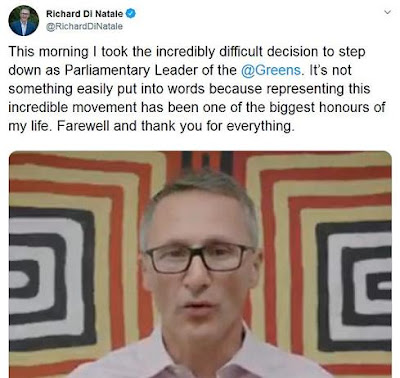 Remember how Mr Skivvy left his post as Pied Piper of the local moonbat hordes, passing the gig onto the Antipodean "AOC" (Adam the Obnoxious Cockwomble)?

I always thought that was really weird. The dominant explanation from conservatives was that he was worried about the fallout from an investigation into the catastrophic bushfires, and the high likelihood that the Greens would be held to account in some way for engineering such massive ground fuel build up, which clearly exacerbated the disaster.

That was prolly a big part of it ... But he's also a qualified doc, right? Maybe he had heard that something along the lines of this obvious plandemic was on the horizon, and he didn't wanna be part of it. I like to think that while he is a greenie, he's not completely misanthropic.

Also, Lucy Turnbull stepped down from her position in the Greater Sydney Commission. Now, if this "smart city" sister was absolutely confident that her creepy control freak utopia was gonna come to fruition, she'd definitely hang around for all the fun, right? Her resignation implies that she's lost hope that this will be the case.

Then there's the fact that a prominent local Qanon follower and mate of the Prime Minister has finally returned to Twitter after being slimed into social media silence by the MSM several months ago. 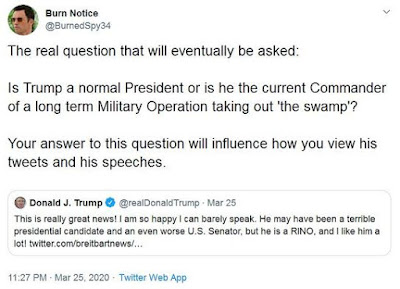 You may recall that he along with Dr Russell McGregor suffered putrid hit jobs from the fake news peddlers at The Guardian.

Seems to me pretty significant that a mate of the PM's thinks it's safe to tweet about this grand "conspiracy theory" again. And as you can see above, he recently echoed the idea of a massive hidden war going on that I described at the beginning of the post.

So, crazy as it's all getting, it looks very much like The Storm is upon us, raging in the shadows. And the freedom lovers will eventually prevail over the control freaks.

The evil clowns are desperately using all their assets to keep us from seeing the truth. However the harder they try to do this, the more obvious their whole sick circus becomes.
If you've enjoyed this post please consider supporting me via Ko-fi. Aussies, know your rights!