A coupla days ago I saw this Daily Telegraph cover story about a stoush over a woman between two beefy Italian rugby league players. It was mildly politically incorrect in its invocation of the Italian theme and certainly gave me a laugh. One of the first paragraphs brazenly included the phrase "cracking on". Frankly I think the writer should win a human rights award just for that!

I suspect the paper didn't receive any complaints for this story. After all, Italy is part of Europe, historically inhabited by white folk. So it would be a real stretch to characterize this as some kinda hate crime, even for a sneering hipster from Sydney Uni. Still, with all the social justice warriors running amok these days, more and more people are getting offended by the most innocuous things. 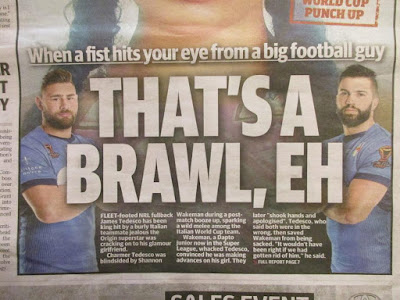 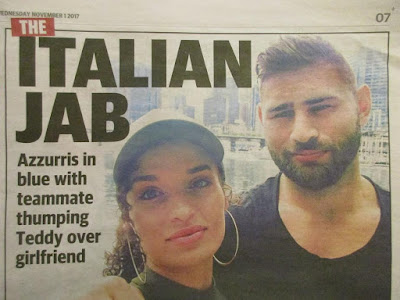 Anyhoo, it got me thinking about how this paper is perceived by its audience. Obviously, the vast majority of its readers don't take offense to its often abrasive approach, and appreciate this kind of humour. That's one of the reasons it's so popular.

On the other side of the media spectrum there's Fairfax, which is struggling financially. Clearly, a major reason for this is its drearily right-on, humourless approach.

Without a doubt the sneering hipsters who regularly read the Sydney Morning Herald would look at a front page like the one shown above and roll their eyes at what they believed to be its typically crass and culturally insensitive tone.

But does Fairfax truly walk its talk when it comes to being politically correct? If the Chris Gayle defamation suit is any guide it certainly doesn't. The case was a clear win for the Jamaican, who successfully argued that stories published about him were both false and malicious.

If the Daily Telegraph was the paper coughing up defo payments to a black cricketer, you can be damn sure that Fairfax writers would be howling about the "racism" of the journos and editors in question. Maybe they should be applying those same standards to themselves for once?
Posted by MattHaydenAU at 10:53 AM