Australia may have said yes to SSM, but Sydney wasn't quite so sure

Still kinda reeling from the outcome of the postal plebiscite for "marriage equality". I thought that the No side had waged a very effective campaign and managed to get a lot of Australians to think long and hard about the issue. After all, marriage is about a whole lot more than just "love" and there are many good arguments for keeping it as it is.

Given what had happened with Brexit and the election of Trump, and how both these results completely confounded the pollsters, I thought we may well have been in for another surprise. Even posted this prediction:

Obviously I was being way too optimistic. I suspect that while a lot of people did realize they were being conned with all the pretty rainbow signs and flags and emotive lovey-dovey rhetoric, this came late in the process. So, while the fusty fighters pegged back the Yes side's lead somewhat, the result was pretty clear nationally.

Not surprisingly there was a clear distinction in the way the two main Sydney papers covered the issue. The Daily Tele employed its trademark politically incorrect abrasiveness, and the Herald was its usual gushy, mushy, virtue signalling self. 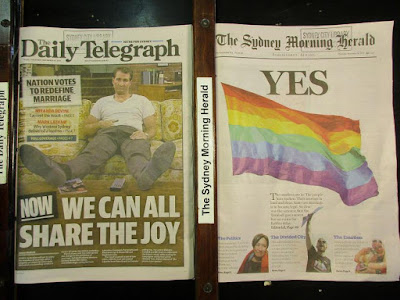 Speaking of distinctions: There was a massive fault line in Western Sydney, where the biggest no vote was recorded. This was really intriguing.

Blaxland had the highest proportion of naysayers. When I first heard about it I thought maybe this was due to the lasting influence of the seat's former member Paul Keating, who said "Two blokes and a cocker spaniel do not make a family".

Obviously not. The electorate has changed massively since then. It was mostly due to the high proportion of working class people from non-English speaking backgrounds, especially Muslims. Among other things this makes Yes zealots undeniably elitist, Islamophobic and hence racist by their own definition.

And it's pretty funny that the sneering hipster crowd still sees silvertail electorates as homophobia hotbeds. Warringah (Tony Abbott's electorate) scored among the highest yes votes in the country. That's another way in which their child-brained PC narrative was confounded by reality.

Funny how so many of the Yes side called their opponents "dinosaurs". They should curb their enthusiasm. We just had a survey in which over half respondents said that SSM is fine with them. That is all. The law has not yet been changed. By their criteria, Oz is still "Jurassic Park", innit?

The way the Yes crowd now condemns those who had the temerity to vote no is a bit like the tsunami of claims about Harvey Weinstein, IMO. Everyone in Hollywood knew about his vile behaviour, but heaps are only speaking up now. If "marriage equality" is such a "fundamental human right", why no momentum for it yonks back?

The massive push for SSM is a relatively recent phenomenon. Back in ultra-PC Artsville in Melbourne in the 90s I hardly ever heard demands for it, even from gays and lesbians. It's come globally from above (cultural Marxism). The idea that it's developed organically from the bottom up is total bollocks.

If you're a married Yes voter claiming it's "homophobic" and a "human rights violation" to deny marriage to LGBTIQ folk, surely that was always the case ... So why are you only now condemning this injustice, congratulating yourself for your compassion? Where were you when it mattered?

Married heteros pushing the "fundamental human right" line on SSM are yuuuge hypocrites. They're like white South Africans who did sweet far call about apartheid when it was law, then congratulated themselves after it was ditched. If they had any sincerity, they would never have been married in the first place.
Posted by MattHaydenAU at 12:29 PM