Kinda funny that sneering hipsters detest the Daily Telegraph. They see it as wholly eeevil -- one of the main ways by which those vile right-wingers brainwash Sydney's plebs into believing in quaint notions like freedom of speech.

But as usual they're way off the mark. While the tabloid does have some high profile columnists (such as Mark Latham) who appeal to the sane, rational adult demographic, a fair whack of the rest of its content is pretty dang PC. In other words, like many News Ltd publications, it actually has a range of views.

Hell, it even includes input from animals -- or as the more extreme activists like to call them, "non-human persons". Take this nosy little critter, "The Ferret". 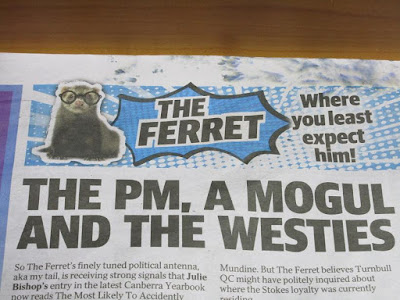 Rather than condemn the paper, deep green lefties should actually rejoice that the Daily Telegraph is such a staunch ally in the crusade against speciesism. Even the Sydney Morning Herald isn't that non-discriminatory in its employment practices. (Frightbats aren't actual bats, remember -- though I'm sure many of them do sleep upside down.)

Even better, "The Ferret" actually seems to be a bit of a leftie himself -- well, if his last column is any guide. You could even call him a "fur-bolshie" ... 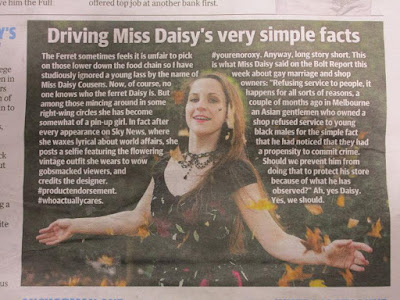 Now, Ms Cousens has form on provoking the Left. She routinely triggers SJWs into foam-flecked fits of pique, in which they often reveal their own ugly bigotry. The fact that she's now done this to a member of the family Mustelidae is testament to her trolling skills.

"Now, of course, no-one knows who the ferret Daisy is. But among those mincing around in some right-wing circles she has become somewhat of a pin-up girl."

Is Mr Ferret unaware that in left-wing circles that term is verboten? It's inherently homophobic, and in a few years could even be classified as hate speech (along with "tranny" and "fag").

Anyhoo, doesn't he know that right-wingers don't mince. They stride!

But I shouldn't be surprised at his ignorance given his very sheltered existence. Most of the time he's curled up asleep in a tubby goth's cleavage, after all ...

But the thing that really shat off the bespectacled fur-bolshie (which consequently caught my eye) was what Ms Cousens said on The Bolt Report in relation to the consequences of gay marriage for shop owners:

"Refusing service to people, it happens for all sorts of reasons, a couple of months ago in Melbourne an Asian gentleman who owned a shop refused service to young black males for the simple fact that he had noticed that they had a propensity to commit crime. Should we prevent him from doing that to protect his store because of what he has observed?"

Presumably, like his fellow-travelling humans, he's being very selective in his standards here. Does he think that the Rose Hotel in Chippendale should have been prevented from cancelling this regular Christian gathering, I wonder?

And regardless of consistency in application, how could shop owners be forced to serve all customers whether they like it or not other than through the introduction and rigorous enforcement of truly totalitarian laws?

That's one particularly deep and dark rabbit hole this particular ferret is very reluctant to investigate, I suspect.
Posted by MattHaydenAU at 8:51 AM