Christmas comfort and joy remains in Sydney ... for now

Gotta say I've never really been a huge fan of Christmas. I've long thought it was a bit OTT in a commercial sense, and certainly incongruous given that its imagery is all European and wintry and it's the hottest time of the year down here in Australia. I'm also an atheist and find all rituals, no matter how tenuously linked to religion, a bit naff. Prolly a bit of a Grinch at heart too, I'm afraid ...

But I'm still very glad Chrissie's still going strong and people really enjoy it and find it meaningful. I find Santa's presence a bit like that of Queen Elizabeth. I'm neither's biggest fan, but I'm damn glad they still keep showing up, year in, year out. They're two benign constants in an ever changing world. 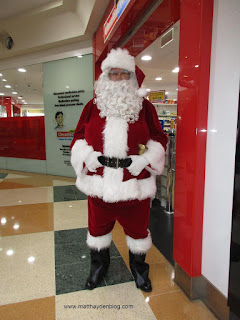 When I say "world", I mean Western world of course. And there are many groups who are trying to subvert, or flat out conquer, that particular civilization, of course.

The right-on Left (or cultural Marxists by another name) seethe with impotent rage at this time of year. (Well, being the losers they are, they're always doing that, natch. But this is an especially painful time for them.) Fact that so many people worship this fictional fat 'n' happy ol' white guy triggers the poor little PC poppets big time. Being the thick, unoriginal bullies they all are, they can't come up with anything more appealing to replace him with, either. That just increases their butthurt. What a laugh!

All these malignant, stunted half-people can do is bitch and moan about how "sexist" and "racist" the festival is and try and ruin it for those who genuinely enjoy it. Telling them that "Merry Christmas" is verboten and should be replaced with "Happy Holidays" is one way. Passive aggressive hijacking of yuletide family get-togethers is another.


And when you say that Christmas is under assault -- by them, as well as other groups -- they roll their eyes and say you're being paranoid. That's gaslighting, another favourite tactic of theirs.

But assault is not too strong a word. An Islamist arsehole just rammed a bloody great truck into a crowd of people at the Berlin Christmas Market, killing several of them. And similar plans for Christmas day in Melbourne were foiled by the plods.

As is so often the case, these violent fantasies were reportedly "inspired" by ISIS. (Gawd, how much of a loser must you be to find those head-hacking savages "inspiring"!)

Needless to say, politicians and coppers were very careful to trot out the politically correct line after the arrests. Victorian Premier "Dan the (anti) Man" Andrews made a point of saying the murderous intentions were motivated by evil, not religion -- zif the two are always mutually exclusive. Sooo simple-minded. Fact is, they can also be mutually explosive. Sooner we acknowledge that and say what's actually behind these attacks the better, IMHO. 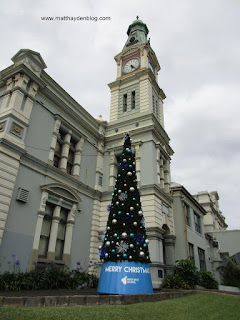 And we should celebrate the festival without shame. That certainly seems to be the case in Sydney now. Lots of yuletide decorations and displays around this great city -- such as this tree out the front of the Leichhardt Town Hall. (The Santa above was photographed in the nearby shopping centre on Norton Street, BTW. And he was very popular with mums, dads and kids. Good to know.)

Christmas is a lot like the wider culture that spawned and maintains it -- Western Civilization itself. It's still going strong, but that doesn't mean it isn't under sustained attack on many fronts.

You don't have to be an ethnic westerner (that is, of European descent) to be part of and appreciate Western Civilization. And you don't have to be a Christian to enjoy, or at least respect, Christmas. That's the beauty of both. Which is why we should continue to appreciate and not apologize for them. They'll be gone in a heartbeat if we don't.

I may be a cynical godless Scrooge myself. But I'm damn glad the jolly ol' bearded chubby guy still lobs on December 25 to say hi (and ho, ho, ho!). Long may he rein, deer!

Merry Christmas everybody. I wish you all comfort and joy.

Posted by MattHaydenAU at 10:20 AM