Walking down Beaufort St yesterday I saw this ad from the Greens. I thought it was typical of their sanctimonious sentimentality. As you can see, it shows a coupla blokes being hitched, and says: "Marriage is about love not laws." 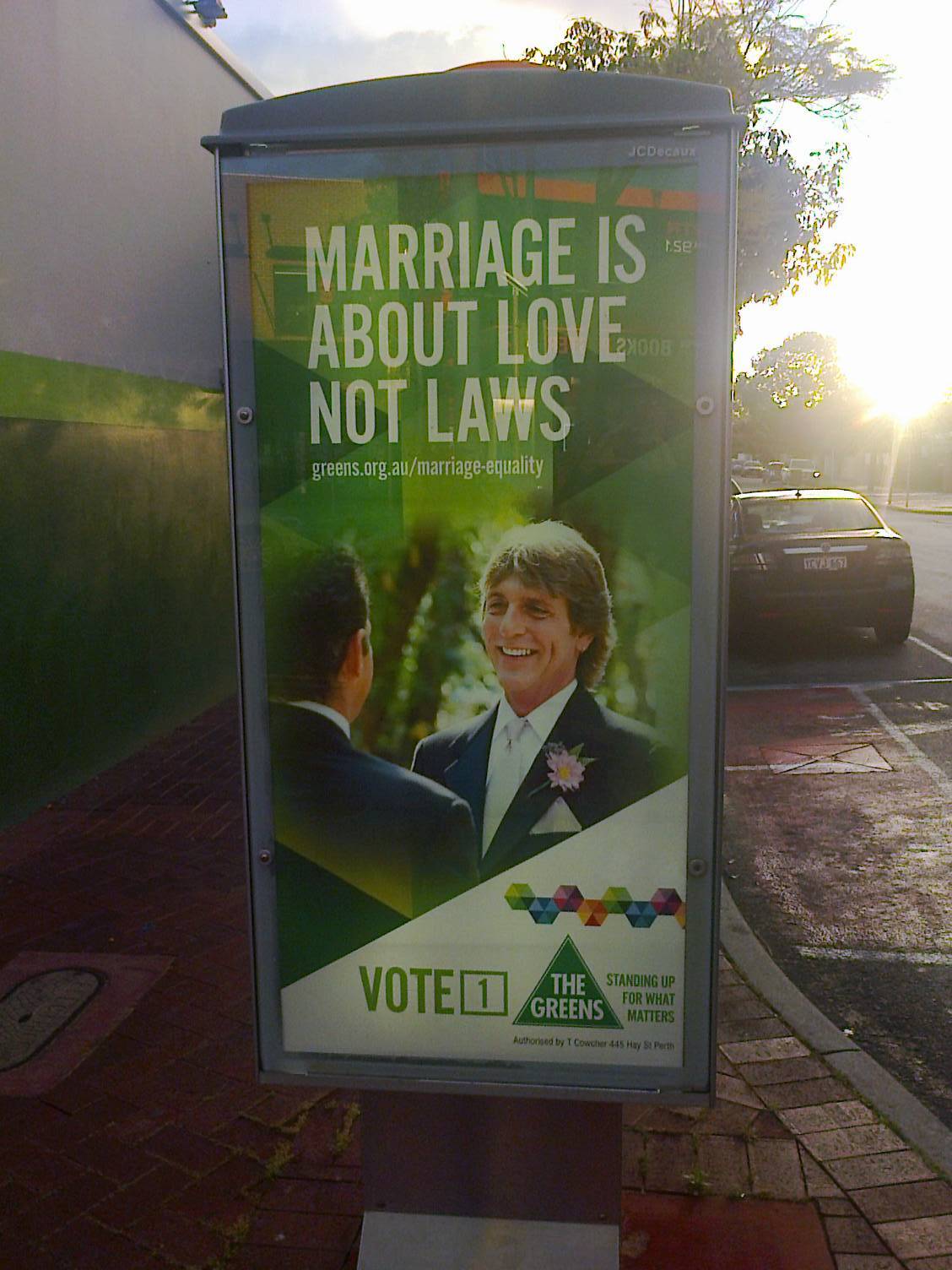 That begs the question: If it's not about laws, then why are the Greens trying to get the laws changed?

There's the other obvious question: Is marriage really primarily about love?

And what about the meaning of love itself? In the words of that great 1980's musical philosopher Howard Jones: What is love anyway?

Well, let's just ignore that wider mystery and assume that everyone knows what the Greens are on about in their ad ...

So, obviously everyone wants to find love. And clearly a marriage without love wouldn't be much fun. Still, many marriages survive without it. Conversely, many marriages between those who do truly love each other ultimately fail. (The course of true love never did run smooth, remember.)

Fact is, marriage has always been about a helluva lot more than just love. It's much more about achieving social stability than delivering personal fulfillment. Among many other functions it's there to keep the ravenous male sex drive in check and to ensure that blokes do the right thing by the kids they sire.

Sure, it doesn't always work out as planned. As lefties love to remind us, life is messy. But it's important to have ideals that the majority of people aspire to, even if many fail to live up to them.

In fact, society wouldn't function without numerous societal norms enforced by laws. Take paying for stuff at the shops, for example. That's a societal norm, enforced by laws. No doubt some lefties would like even that to be given the flick. But imagine if it were. The economy would be stuffed in no time and chaos and violence would reign before too long.

Having blokes marrying blokes and chicks marrying chicks wouldn't be as destabilizing as that. But it would have a huge effect nonetheless. Call me old fashioned, but I really don't think we should throw the codger out with the bathwater when it comes to the definition of marriage. It is one of humanity's most enduring and universal institutions. Radically altering the definition of it looks too much like "policy in the run" to me. If gay marriage becomes the norm it'll be the thought bubble to end all thought bubbles, I reckon.

I'm all for a robust open debate about the meaning of marriage. And if "marriage equality" -- itself a deceptive term -- does come as result of that, so be it. But it definitely shouldn't eventuate because some special interest groups managed to bully pollies using highly emotive tactics and false accusations of homophobia.
Posted by MattHaydenAU at 2:38 PM