ABC's The Drum no longer tweeting panellist quotes. So disappointing!

We all know that their ABC is a massive fake news factory that should be privatized ASAP. But some of its productions are more excruciating than others. The Drum is certainly one of these. In some ways it's prolly even worse than Q and A because it's on every day, not just once a week.

Yes, they do have sane adults on there occasionally. But they are obligated to pay lip-service to PC at least once every appearance, or they don't get asked back. You know, something like: "Well, I see your point Jonica. Of course this is a climate emergency. But will we really reach the end of the world as we know it in a little over a decade, as Greta Thunberg claims?"

So, even the smart, sane folk are made to look dumb and crazy. And the rest are basically barking, let's face it. You wonder where they find these people. Many come from the Halls of Quackademe, which is depressing in itself. If some bright spark could turn their asinine brainfarts into electricity, each episode could prolly power Sydney's entire grid for a week. It'd be the Ultimo in renewable energy! 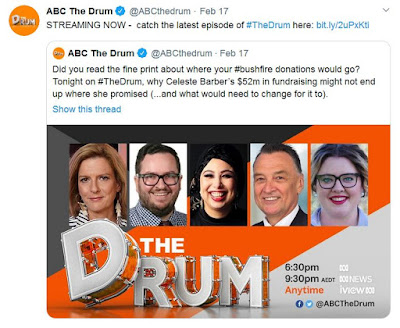 In any case it's a great source of dopey right-on quotes to make fun of. For a long time they would separately tweet these out with a picture of said guest, who was usually striking a po-faced and/or tilty pose, often with OTT gesticulation.

This was great for people like me since watching the show all the way through is just unbearable. They'd have to strap me into a chair with my eyes taped open A Clockwork Orange style! Even then I'd prolly manage to break out of my shackles after several minutes and run away screaming.

But the tweets were great. Real fish in a barrel stuff and easy on my mental health. Also, I could take screenshots and share them on other social media platforms and this blog.

But in the last coupla weeks they've actually dispensed with this format. Sooo disappointing! They are still tweeting updates, but they're in the form of little video grabs. And there are much fewer of them.

That makes taking the piss much more, er, problematic.

I am intrigued as to why they did this. I think it might be because they're just so sick of getting owned on Twitter. Every one of those tweets would provoke numerous scathing replies.

Also, Ellen Fanning, one of the show's regular loon wranglers, did actually block me. And I know I've never tagged her on Twitter. So I suspect this was because she'd seen one or more of my hashtagged tweets mocking the show. So maybe my own long term efforts had a bit to do with this?

OTOH, it could all just be due to some sort of budgeting decision. Still, I suspect that's kind of unlikely because there's been no major news of cuts to their ABC recently, at least AFAIK. Also, one of their perfumed organic autocue extensions tweeted this out recently. 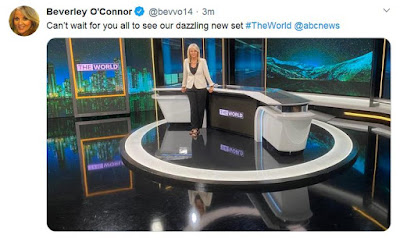 If they've got that kind of dosh to throw around, I doubt they'd have to punt one or more of their "social media managers".

So, I do think this recent change to their online strategy has been due to the adverse reaction from people like yours truly ... Actually, it seems like a milder version of The Conversation locking out climate change "deniers". Just another sign that the normies are waking up to the globalist, warmist, cultural Marxist lies and pushing back against the state-funded insanity. All the brainwashed PC narrative peddlers can do is try to ignore the rising tide, doubling down as they always do. That's clearly a losing strategy long term.

So, this is heartening. But I've gotta say I'm a little sad I won't have all those Twitter fish in a barrel -- or rather, drum -- to shoot anymore.

Still, it's not like their ABC doesn't supply countless other easy targets. Take this guy. 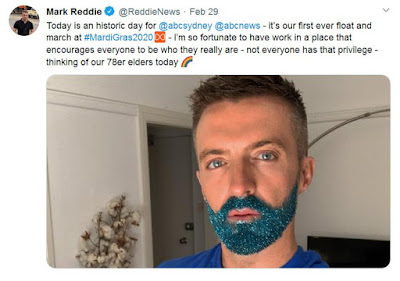 Move over Derek Zoolander. This look, even sillier than "Blue Steel" is so hot right now! It's called “Blue Glitter”.

Hmm. Maybe he could report on this very meta "murder" that he himself committed? He'd surely be in the running for a Walkley award (for so-called journalism) if he did ...

Clearly, the whole sad clown show is just getting more grotesque and excruciating by the day. Something's gotta give sooner or later.

Also, there's been a big push to switch the BBC over to a subscription service. That will surely help build momentum for a similar change here in Australia.