Didn't get down to watch the ANZAC Day march in Sydney yesterday. However, while briefly in the CBD I did see lots of old blokes proudly wearing their medals. And I read and heard many reports of the huge turnout. So, seems to be more popular than ever.

Now, I know there's a lot of disagreement about the nature of the commemoration. It's a bit like Easter and Christmas in that regard. These rituals have become too commercialized, the purists say. They've lost all their spiritual meaning.

With ANZAC Day it is not about commercialization. There are various criticisms, including that it's no longer a solemn occasion to honour our fallen and living soldiers and a time for serious reflection on the horrific nature of war and the value of sacrifice. Instead, it's morphing into a vague, nationalistic celebration of Aussie-ness; a fun day out for a bit of flag waving.

There was an interesting discussion last night on 2GB about this. Steve Price said he thought it was a bit silly that descendants of diggers should march and wave to the applauding crowd. "I mean, what have they done?" he asked. (Segment is over an hour in, some time after 9PM.)

Sam Newman put the opposing view, that there was nothing wrong with people glowing with pride over what their ancestors did to build this country.

Well, I'm undecided on this question. But I am glad that the day is still seen as hugely significant. The fact that it makes people reflect on our national history and the value of democracy is a good thing.

Of course the Left just loathes ANZAC Day. They say it's a celebration of violence. They get off on trashing the memory of our beloved diggers and claim they weren't heroes at all. No, they were all rapists and murderers running amok, they reckon!

Such a load of bollocks. Anyhoo, if those blokes hadn't gone off to fight and die in foreign hell-holes then today's whining PC parasites wouldn't even be free to slag 'em off, would they? With totalitarians in charge to this day, any rebel waving a placard would be locked up in some ghastly concentration camp -- if he were even allowed to live, that is.

But it's pointless trying to explain that to your average sneering, sulking socialist. They're incapable of perceiving the truth. (Actually, they can't perceive anything much. They're too busy indulging their precious fee-fees; wallowing in their own spurious victimhood and fake virtue.)

Generally speaking, lefties don't learn anything much as they get older. Emotionally and intellectually they remain spoiled sprogs. But sane, rational, non-doctrinaire types do develop with age, of course.

If you are one of these people, one common tendency is that you become more interested in history as you get older. I believe this is because with a few decades of living under your belt you've seen a lot of changes occur around you. So you are aware of how those events made you who you are. And you start to wonder how a nation's character is shaped, too.

Now that I've cracked the half century myself, I really notice old buildings and monuments much more than I did even a decade ago. Take this war memorial in Annandale. 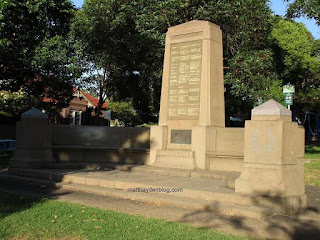 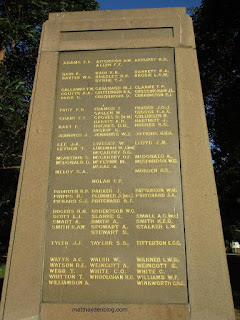 As the plaque at the base solemnly states, all those guys listed above made the supreme sacrifice in World War One. 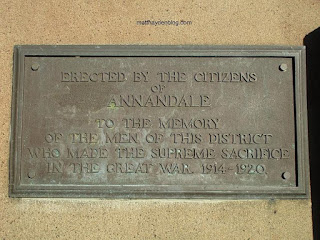 There aren't all that many people living in Annandale even now. So you can imagine how devastating such a loss would have been a century ago. And there are memorials like this all across Australia ...

As I mentioned I didn't attend the march in the city yesterday. But I did get this little video of a band playing bagpipes in Town Hall station. That music really gets you deep inside every time.

I just snapped it on the fly so it's short and shaky. But behind them you can see the surfing video that's a fixture in Sydney train stations these days. These guys performing against the backdrop of those free, youthful and very contemporary images is a nice metaphor for the value of the past in the present, IMHO.

Lest we forget, eh?

Posted by MattHaydenAU at 10:52 AM