Perth March in March mystery: the bloke in the yellow sheet

Have you ever had an experience that was highly reminiscent of a thriller or horror movie that sent chills down your spine? You know, like waking up in the middle of the night and seeing some butt-fugly face staring at you? Frozen in horror, you were unable to breathe for what seemed like minutes until suddenly the hideous mug disappeared and you came to full consciousness ... Or maybe while stopped at a traffic light on a wet day you saw rain drops collecting on your window that spelled out the word "death". But no sooner had you apprehended this terrifying omen than it was scattered to oblivion by the windscreen wiper.

Yeah, well, I just experienced something similar ... kind of.

See, about an hour ago I was down at Langley Park for the start of Perth's March in March, intending to shoot some vids for YouTube.

Anyhoo, when I first arrived I took a shot with my phone. Tweeted it about twenty minutes ago. It was only after I did so that I noticed a most intriguing figure in it. He was a bloke in the crowd who seemed to be wearing nothing but thongs and a yellow sheet (or was it a towel?).

Now I find this very mysterious. Actually, I feel a bit like the David Hemmings character in the champion Antonioni flick Blow-Up. While developing shots from a fashion shoot, he realizes he may have inadvertently captured a murder.

Sure, nothing was murdered at this event except common sense. Still, shrouded figures are always fascinating. You've gotta wonder, who was this be-sheeted bloke?

He seemed to be a visitor from another dimension whose presence was deeply symbolic. But what did his sinister presence mean, exactly?

Hmm. Some of the protesters were chanting their desire to put Tony Abbott on a guillotine. Was he some kind of antipodean unionist version of Ingmar Burgman's Death character, perhaps?

If so, I'd say watch out Tony. Particularly if this same figure appears at the next Abbott presser. 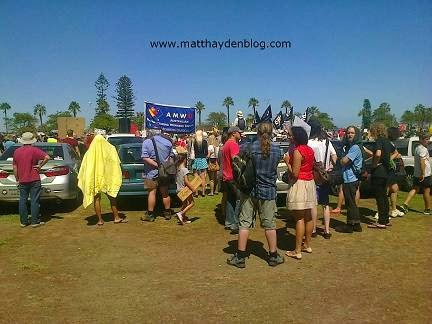 Posted by MattHaydenAU at 1:53 PM