Meant to write about the gutless Antifa attack on Andrew Bolt in Carlton soon after it happened. But I've been flat out lately. This is the first chance I've had. Fact that so much has happened since then (eg, the UK election and Comey hearing among other things) illustrates the dizzying pace of political developments these days …

But on the now legendary “Battle of Lygon Street”: Bolt was admirably combative during the ambush that occurred before the Melbourne launch of the book The Art of the Impossible. And I think he (along with his supporters) did a very good job of using the event to build a counter-narrative against the toxic, politically correct one that dominates the MSM, and that we're all so utterly sick of.

Conservatives have long been extremely tolerant and forgiving with their opponents. That's fine if you're dealing with sane, rational adults who have a sense of fair play. But that certainly does not describe the PC Left -- in particular Antifa. They are clearly totalitarian; well on the way to being the fascists they purport to oppose.

So it was good to see him hit back and hard. And it showed how pathetic his attackers actually were. If you don't count the fat cameraman (who fled the scene and claimed he was there by chance -- yeah, right!) there were two young men against one maybe twice their age. They caught him totally by surprise, yet he sent all three scumbags scurrying. As well as delivering his speech as planned, he made light of the scuffle in many ways, including auctioning off the suit he was wearing (now ruined by dye and glitter).

It's important to take advantage of victories like this to laugh at your enemies. Apart from anything else those looking on will see strength, conviction and good humour. They will be much more likely to respect you as a result.

By opening an extra large can of whoopass on his ambushers, he “won the internet” that day and confounded the PC narrative big time. The victory deserves a new term, IMO. I reckon henceforth “bolt” can be used as a verb, not unlike “fisk”. It can be employed to describe a brutally swift counter-attack against a leftie pile on (physical or rhetorical) that totally blitzes the perps.

For example: “Melbourne hospital staff should keep an eye out for simpering beta-males arriving in casualty whose tiny nuts had been severely bolted.”

The so-called “hate media” have been getting plenty of humour out of the whole story. Take the Daily Telegraph itself: 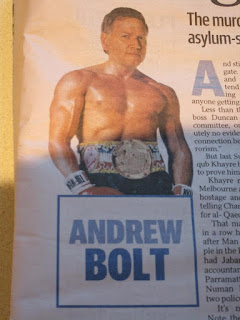 The Rocky stuff is fun, and worth running with for a week or two. But at the risk of seeming a tad pedantic, it kinda ennobles his opponents. See, if he's Rocky, this implies they were brave and formidable in their own right like, say, Apollo Creed.

And rather than aiming to win a contest fair and square, their motivation was primarily to create propaganda. They used the trusted leftist tactic of crybullying: First, bully a lone target. If he doesn't react aggressively then you've cowed and humiliated him. If he does hit back you can cry: "Waaah! No fair!” Either way, it's vital to have footage of the incident that you can use as "evidence" that you are the true freedom fighter and your opponent is a big bad nasty Nazi!

But even the footage taken by Mr Chubby McYouTube himself showed that Bolt's reaction was entirely justified. Pretty much anyone would have gone into fight or flight if set upon so quickly from behind by hooded men and sprayed with liquid, as he was. Then there's the fact that he regularly gets death threats … Remember also that the ambush was so violent that a woman was thrown aside, screaming! (Leftie feminists silent on this, natch.)

Put yourself in his shoes and watch it. If you claim that his reaction was massively OTT then you're totally full of BS, or lying to yourself at the very least.

That Bolta was not the bully, but the victim who fought back is obvious to anyone with eyes to see! Sadly, that doesn't include many leftists. Hell, they could've earned some respect from the Tories, normies and everyone else by accepting reality and saying: “Yeah, those thugs did something truly vile and stupid. Antifa should BTFO, or lift their game at the very least.”

But nup. Like pathetic zombies, the group's online apologists have endlessly tweeted and retweeted the lie that the conservative columnist went totes ballistic over "a harmwess wittle gwittering".

Hell, there's even an online petition to have him arrested by the Melbourne plods! Sure, it seems somewhat satirical. But many of the signatories look genuine, rehashing the asinine line that the glitter twins did something entirely innocent and were actually the victims here.

FFS! Like dogs returning to their vomit, they are. Just never learn ...

Which, strangely, might not be such a bad thing, in a way. If these bolshie bozos keep this stupid crap up eventually more and and more people will realize how ugly and useless the Left has now become. They'll ultimately lose much of their power in the media, academe and elsewhere ... I just worry that someone is gonna get killed, that's all.
Posted by MattHaydenAU at 1:04 AM