Did Albo just take one for the team?

I think it's worth looking closely at the social media accounts of various blue check slebs and pollies because they can give you a sense of what the hidden globalist agenda actually is at a particular point in time, and what moves are being planned and/or made. Sure, they often interact with fans and followers on these platforms but they do seem to use them mainly for symbolic signalling to each other.

A good example of this is the repeated allusion to the "Mad Hatter". Of course that sounds absurd but please check out my thread on it and you'll see, this motif is definitely being used in social media updates by Dan Andrews and Scott Morrison.

With this hidden comms aspect in mind I couldn't help noticing this update from Albo. 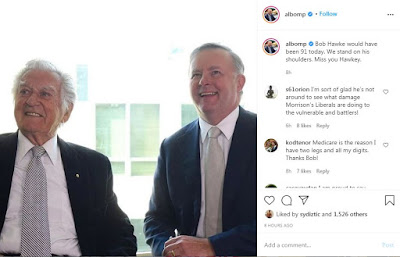 Upon seeing that I immediately thought of Hawke's death. As you'll recall, he popped his clogs just before the federal election last year. More than one well known "journalist" commented on the exquisite timing of his death.

Of course they never suggested that his expiration was anything other than a natural event. But it all seemed pretty dang suss to me. 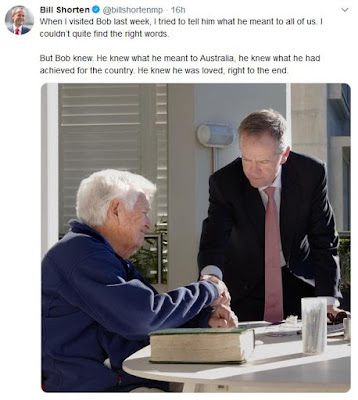 My first thought was that the ageing Labor legend took one for the team.

He was of course a full-on socialist and globalist. He must have been horrified at the rise of Trump and would've seen ScoMo as being a kind of Mini-Me to his Dr Evil. He knew what a yuge story his passing would've been. It turned out to be just that as we all recall.

Predictably, Labor pollies and many others on the globalist Left leveraged Hawke's death for Shorten's tilt at the Lodge. There was even that cringeworthy #DoitforBob hashtag all over Twitter.

I suspect it helped Shorten quite a bit. But it wasn't enough to get him over the line.

With ScoMo elected as PM, Shorten took a back seat, letting Albanese take the helm. I reckon the plan was always to let the MP for Grayndler be a mere placeholder. And now that Shorten -- along with pretty much everyone else in Canberra -- thinks that nationalist Trump has been vanquished, and a fellow globalist leftie will be in the Whitehouse from now on, it's a much better time for him to return to the driver's seat.

A recent interview with Peta Credlin makes it clear that he's tryna show the normies he's learned heaps from his loss back in 2019. So I suspect he's got the Labor leadership in his sights again. 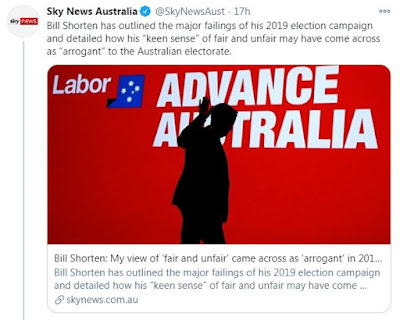 I think Albo knows about this and is okay with it. That's why he tweeted that photo of him with Hawke. It was like he was saying: "Remember what Bob did? Well, I'm gonna do the same -- without dying, of course."

Shorten seems to be much higher up in the globalist elite's power pyramid than Albo. High ranking Freemasons and ultra-Zionists are right at the top of this. That's why I think this other tweet from the current Labor Leader was significant. 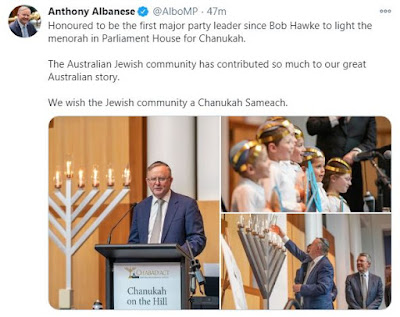 Again Albo invoked the memory of Hawke, who was clearly a big time globalist NWO advocate. The Labor Party's ultimate controllers greatly appreciated what Albanese has done for them, and expressed their gratitude by letting him light the menorah. He was obviously massively chuffed about this. IMO they were basically saying "thank you for your sacrifice", before putting their preferred puppet Shorten back in place.

Posted by MattHaydenAU at 2:40 PM