A symbolic pattern I see more and more lately is related to the theme of the black sun. The globalist occult elite really love it for various reasons, including that they see themselves as gods. And being able to black out the sun would confirm that you are god-like, wouldn't it?

It's also the ultimate inversion. And they really get off on turning things upside down.

So you often see this kind of imagery in activities they're involved with. Take the Just Stop Oil vandalism of the "Sunflowers" painting by Van Gogh for example. (And remember how one of the activists had pink hair? There's a rabbit hole to do with that as well. Maybe I'll write a blog post just on that if I find time ...)

Here's another local example: Back in late August the Failing Terrorgraph ran a "Bush Summit" insert. They included this spread about blood oranges being "the new black".

As you can see, the main headline read: "Time to make hay while the sun shines."

There's a definite link being made between oranges and the sun. That's not unusual, of course. 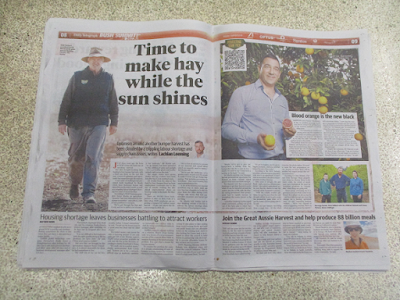 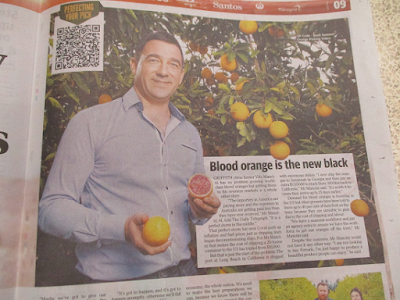 But what's notable here is that in that same issue there was an article that showed a family with the son holding an orange.

This was creepy AF given how often this paper builds these symbolic matrices. And it was just under a headline reading "Bringing the energy". 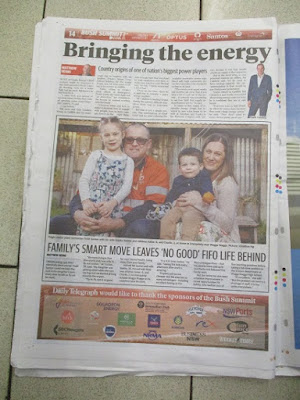 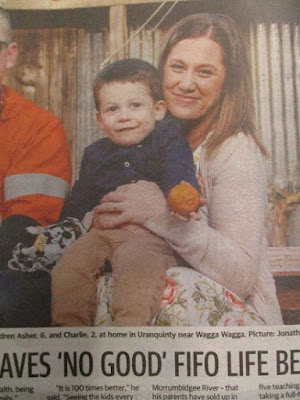 The Luciferian occult elite clearly long for a world in which they get to harvest the energy of the masses (kids in particular). They see it as their "divine right" (they reckon they're gods, remember).

So, in this case it really does look like they were making some sort of sinister reference to child sacrifice. They've done this before in other ways as well.

Of course this would look completely benign to most readers. But when you know they do this kind of thing you really notice it. The devil is in the detail, as they themselves like to say.

Here's another example of this "orange as sun" theme. It's from Sky News, which is clearly run by the same kind of occultist flogs as the Sydney rag (and pretty much all the others by the way).

They featured a story about overpriced sculptures of slices of orange. The depictions of fruit clearly evoke the sun. So by criticizing the funding choice they were "thowing shade" on them, geddit? (And Rita Panahi is dark-skinned. Maybe a coincidence, but then may not ...) 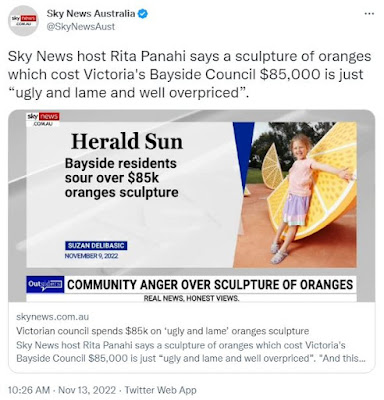 Look at the photo they chose for the story. It features a kid. And she's wearing pink and purple, of course. Note how she's got her arms spread out with the (orange) "sun" behind.

Given the MSM's fondness for subversion of Christian symbolism, I suspect that was meant to evoke crucifixion. Here's another example where I think this was the case.

There's plenty more stuff in this vein that I've collated in a Twitter thread. Please check it out.

Aussies, check out these freedom rally postcards. And please check out the great range of T-shirts and hoodies to get the anti-globalist message out that is linked here.

Posted by MattHaydenAU at 1:41 PM