Here's another example of the pinky-purple theme that I see all the time in the fake news. I think that among other things it symbolizes the elite drug that dare not speak its name.

It seems to be an extremely important part of the "creepy cult that runs the world". They ultimately own and control the MSM, remember. So they get their editors to drop in these symbolic incantations.

Lately they've been feeling their power slipping away (because it is!) and that's why it's been appearing so often. Think of this as a Luciferian version of the rubbing of rosary beads.

They regularly equate baby animals with children. That's why the Failing Terrorgraph recently featured this shot of a firey with a kitten. Note how the image is right next to another headline starting with the word "killers".

Placement of violent imagery next to pictures of -- or stories about -- kids is something they do often as well. They have a thing for child sacrifice, see.

Given the distinctive elements the story contains, it clearly evokes pink fire. 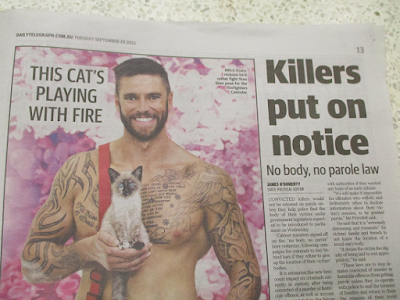 There's an explicit link to blood as well. As you can see below, the second paragraph reads: "NSW firies are gearing up to set hearts alight with this year's Australian Firefighters Calendar ..." 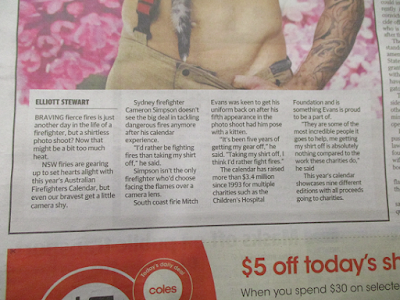 It's very clear what they're doing.

I know some people think this is so absurd as to be impossible and that I'm "cooked" for claiming this phenomenon exists. But look through my blog posts. I've collated plenty of examples of this kind of thing. I've made scores of videos about these symbolic themes too. The patterns are undeniable, even if my conclusions are incorrect.

As the oft-used phrase goes: How many coincidences before it becomes mathematically impossible?

Others agree that there is something deeply sinister and batshit going on, but that it's "esoteric" to point it out.

Esoteric my arse! This is the biggest selling paper in the biggest city in Australia. They're approvingly alluding to evil in plain sight.

It's Baal's out barbarism, FFS! And they've been doing it for ages ...

Yeah, I know that it looks completely benign to the vast majority of readers. That's how they get away with it. High up members of the occult elite have got almost everyone fooled into thinking that the media is solely about informing people.

They misinform most of the time anyway. But they're also doing this kind of creepy stuff. It's right through all the other big outlets as well.

When you learn what some of their fave symbols are you'll see them everywhere. It will explain a helluva lot about the current madness.

Aussies, know your rights -- and please check out these Sydney freedom rally postcards!

Posted by MattHaydenAU at 2:39 PM