In blue and green Neighbours exits the screen ...

Without a doubt there are symbolic colour themes being promoted in the MSM. It's a centralized operation and something to do with the massive, hidden global criminal activities of the Cabal.

I've described a pink and brown theme and what I think it represents. Another strong and pervasive pattern that's started up lately is dominated by blue and green.

This piece from the Evening Standard about the final episode of Neighbours is a good example. Scroll through it and you'll see several shots with this theme.

In a couple of them a green car is featured. Cars evoke traffic.

In the photo below Kylie and Jason look fondly at a wall (bricks and mortar). IMO that is a Masonic image and a nod do the secret society wankers who ultimately control the Aussie TV industry.

Note how he's got his arm around her neck. There are other shots in the piece that evoke this pose. It brings to mind a very creepy pattern associated with the soap that I've blogged about before. 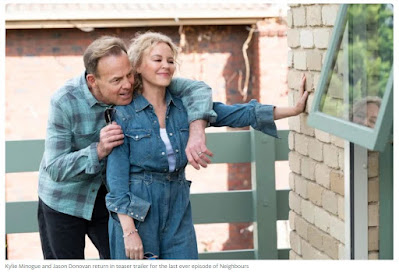 Speaking of secret societies: Check out the sneaky little skull and bones they've included in one of the stills from the show. It's pink, natch. 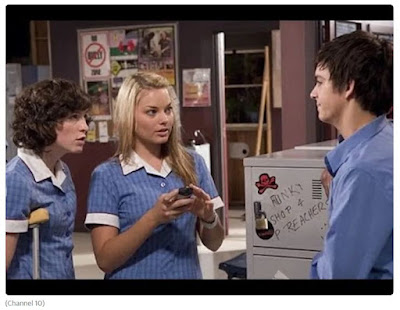 I've seen this blue and green theme right through the MSM. Here's a local example. The blue seems to evoke the ocean among other things. 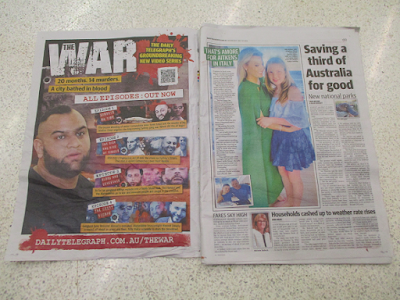 Note how close it is to the blood spatter from the other story. This proximity on the page trick is something they use often.

There are some more examples in this video. If you can, please watch it until the end section about Kate Middleton. It gives you a good idea of just how twisted these people are. 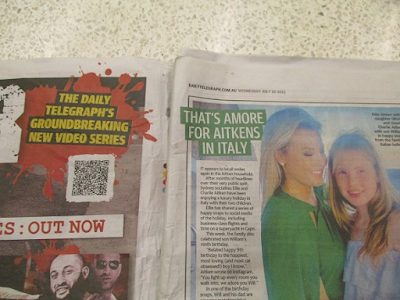 Here's another example. Blue dominates the photo on the right. The bloke featured is dark skinned. That's also part of this pattern.

It's not perfectly clear in this shot but he's got a Nike shirt on. The occult elite love that brand because "just do it" is like "do what thou wilt". 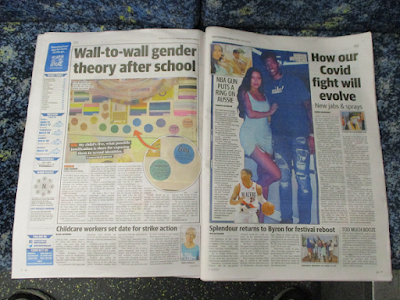 The "wall to wall" headline on the left is notable. Again, walls are Masonic.

And note the blue and green circles. I think that among other things this is meant to evoke Shane Warne's eyes! (I understand why some of you may be rolling your own with incredulity upon reading that.) 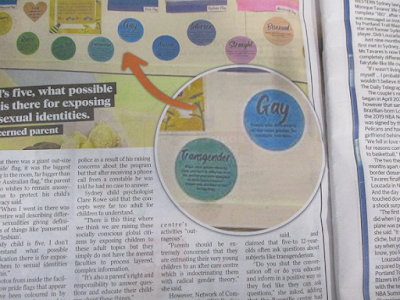 But he did have heterochromia, remember. And the occultist flogs throughout the Aussie MSM just worshipped him, right?

Speaking of Shane Warne: Crazy as it sounds, I'm absolutely sure that the toon in this column was meant to evoke him as well. 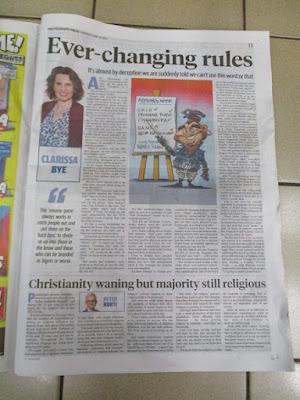 When I say evoke, I don't mean literally resemble him. It was designed only to make a select audience think of him, and his death.

Look at the eyes in the close-up below. Different colours, see.

Also, he's got an earring in his left ear. And there were other similarites.

Please check out this video describing what I think this was about. 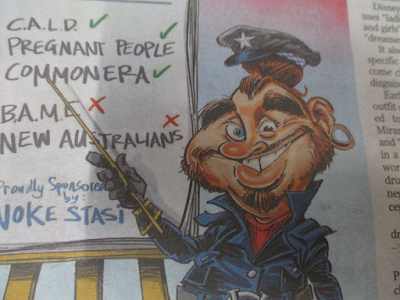 The blue and green theme was present on the whiteboard depicted above.

Below is another recent toon in the same paper in which these two colours dominate. 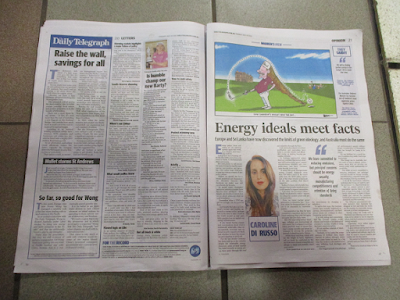 On the left hand side in the top headline walls are mentioned again. And like the one of the "woke Stasi" officer above, the Cam Smith caricature holds his golf club with his right hand. There are other rabbit holes to do with this. 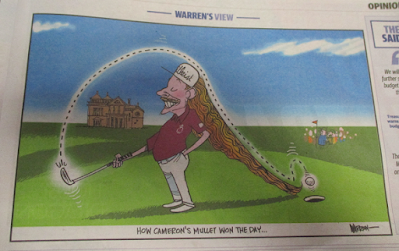 Back to this colour combo and how it harks back to Neighbours and Warnie's sport of cricket: There was a Ramsay St fashion shoot in a recent magazine lift out in the Failing Terrorgraph.

The actress, like the golfer drawn above, has long flowing locks. And look at her outfit. It's got a desert island theme, with those two colours prominent. Again, what are the odds? 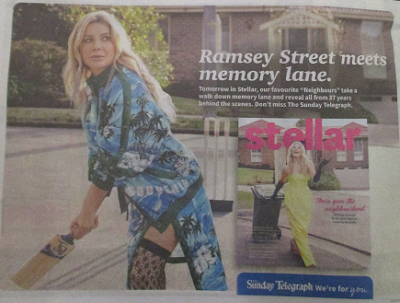 Why was "Ramsay" misspelled with an "e" instead of an "a"? Sure, could have been a typo, but given the context I think it may have been intentional -- a way of evoking "eye", perhaps.
As if the rabbit hole wasn't deep enough already, check this out: Another classic blue dog with Joe Biden. Note the green chairs. Not an accident, IMO. 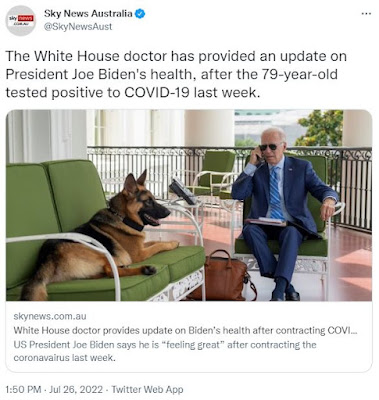 I have seen numerous similar examples in other outlets. This is proof to me that there is some vast hidden world that the occult elite are alluding to. Just as the Deep State sends out its talking points to the MSM at four in the morning, these symbolic patterns are being dropped into fake news outlets across the globe from on high.
It's completely batshit and creepy as all get out! I think much of it has to do with the pink drug that dare not speak its name. And I believe Neighbours had something to do with it.
The video below describes other patterns that lead me to this conclusion.
If you appreciate these posts, please consider supporting me via Ko-fi. Aussies, know your rights!
Posted by MattHaydenAU at 6:35 PM