Australia, the land of the rising scum

After watching footage of the assassination of Shinzo Abe, I'm not convinced it was even real. He didn't flinch after the first shot. When he fell after the second it didn't even appear he'd been hit.

Then there was the DIY gun. Really?

Looks like it could have been a white hat operation. Maybe Abe ratted on the Cabal and being taken out in this way was part of his plea deal.

The event did show how futile gun control is when someone with a military background can make one himself. Given the shooter had that personal history, you'd think he'd be loyal to the ex-PM, right?

In any case I found a common thread in the local "reporting" of this massive international development. As with many issues these days, the globalist controlled editors in Australia's entirely corrupt and creepy MSM mind control matrix seemed to hint that this had something to do with blood. 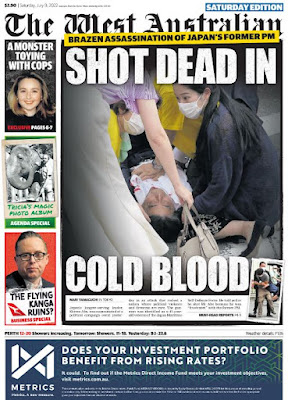 As I've mentioned in previous posts, there appears to be a vast hidden trade in this substance. It looks like it's currently in great upheaval due to the hidden but nonetheless heroic efforts of anti-Cabal forces.

Much of it seems to have been "put on ice", possibly literally. So I thought that the headline above might have been hinting that this was related to the "assassination" somehow.

Of course "in cold blood" is not unusual in itself as a description. But in the context of so much other similar imagery in the MSM -- check out the two examples below -- I thought that a covert message was likely. 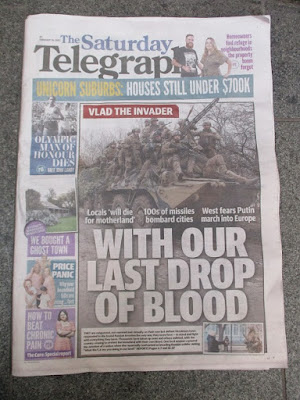 Then there was the symbolism of the flag of Japan. The rising sun is of course red and white, which is also often used to represent the body fluid.

Both SkidMark McKaren and the Goblin of the South used these colours in their commemmorative displays.

Was this their sneaky way of showing deference to their corrupt globalist masters while appearing to honour a "fallen" nationalist leader?
I think it's quite likely. They are cowardly creeps after all. I'm sure they are well aware of this trade and want it to keep going. It seems to be an enormous source of income for the Cabal, and they use that money to control people in positions of power across the world so they can further their agenda.
Here's another example of very clear blood imagery in relation to the "death" of Abe. It was in the July 9 issue of the Failing Terrorgraph. 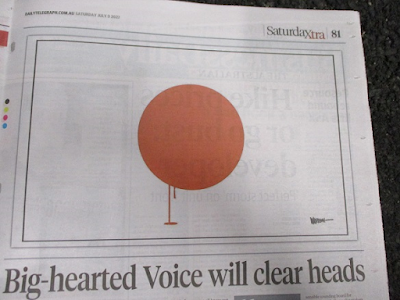 Note how the headline below the toon uses heart imagery. It's for a column about racial politics, which ties in with my theory about how this hidden trade relates to skin colour somehow. Also, it refers to heads being cleared, suggesting a drug-like effect.

That local lie factory does have form for creating subtextual meaning through the juxtapostion of headlines and images in unrelated items, so I do find that particular page intriguing to say the least.

Below is a video that might be relevant to the idea of "cold blood" mentioned above.