Buffed is the vampire player

Recently I saw this story in the Daily Telegraph about an extremely youthful and fit-looking Jared Leto with what looks like blood on his lower lip. It caught my eye because I've seen heaps of references to blood drinking in the MSM lately.

We've heard all kinds of weird tales about how Hollywood works. It's supposed to be chockas with dinkum Luciferians. Frankly I wouldn't be surprised if that's all true.

There's also a lot of talk about a hidden but massive trade in a psychedelic drug that is harvested in the most evil and horrific way imaginable. As well as producing a high like no other, it's reputed to be a kind of fountain of youth. That's why the elites -- slebs in particular -- value it so highly. Was this story about this seeming "vampire" another allusion to it? 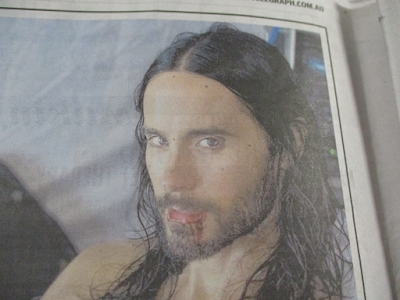 Here it is on Yahoo News. Notice the pink jacket. Pink is often a symbol of this drug because that's what colour it is, apparently.

As usual, the Sydney paper seemed to be using the layout of images and headlines to send some kinda creepy message to a select bunch of occultist flogs.

And see how the story is placed next to one about that unhinged individual deemed a threat to Betty Windsor.

Notice the headline there. 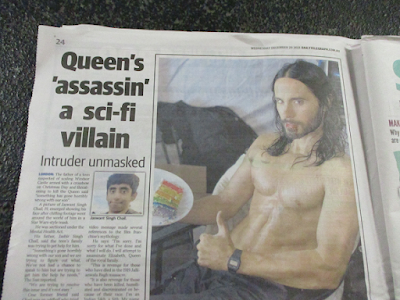 Also, the headline on the Hollywood "vampire" story is significant. "Leto them eat cake" brings to mind Marie Antoinette.

And what happened to her during the tumultuous times of the French Revolution? She was beheaded. 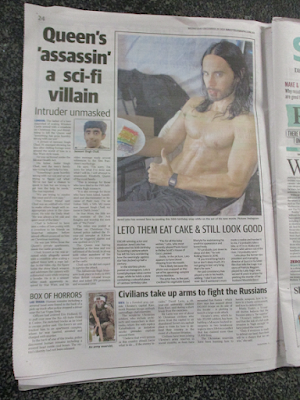 Given the paper so often repeats variations on a theme I looked at nearby stories to see if they were related somehow. Sure enough there was one on the same page about human remains including a severed head.
Given that these were in a pickup truck it was also bringing to mind traffic, another oft-repeated theme. 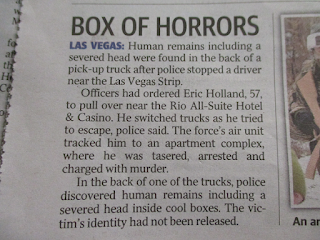 Decapitation is also related to the elite drug because apparently this is how it's harvested (from kids). This story was placed directly below the one about the threat on the royal's life. Could that be a hint to those in the know?
That is, is the inference that the "Queen's assassin" is not the one that attacks her, but instead one who does the bidding of the crown (corona)? And that includes chopping people's heads off?
The headline also states that this guy is a "sci-fi villain" who's been "unmasked". That description could also apply to the photo of Leto himself. It was taken on the set of his latest movie Morbius, a sci-fi blockbuster in which he plays the bad guy.
See what they're doing?
If you enjoy these posts please consider supporting me via Ko-fi.
Posted by MattHaydenAU at 1:11 PM