Big questions about a washed up movie star

If you've been reading this blog and/or watching my videos lately you'll know I have developed an obsession about how the MSM, Daily Telegraph in particular, keep dropping creepy occult elite symbols into their content.

Most if not all of these cases seem to be "it's the vibe" symbolic incantation. But some might be specific comms as well. Whatever their main purpose they're creepy as all get out.

There are enough discernible patterns to conclude that there are deeply sinister activities being alluded to in plain sight in front of millions of people who are none the wiser. As much as I'd like to think otherwise I suspect child trafficking is one of the main ones. When I first noticed these recurring associations, I thought it was some kind of sick in-joke. But there's just too much of this stuff for it to be that alone.

One fascinating feature about these phenomena, and the fake news 'rona narratives, is that Bondi Beach and surrounds have been a real focus of them. As well as being an iconic location in and of itself, this was where Tom Hanks -- reputedly a high ranking Freemason and one who's had all kinds of serious accusations made against him in the last year or so -- took that creepy kid's sock photo we all know about.

That was also around the time all the 'rona madness started. In fact, he kind of launched it into the public consciousness worldwide because he was the first Hollywood A-lister to come down with it.

I'm now convinced that these local aspects of the ongoing "Coronapocalypse" narrative we've been subjected to have been highlighted so that occult elite movers and shakers could communicate with each other symbolically in plain sight in the MSM, smugly savouring the fact that the vast majority of their readers and viewers didn't have the slightest clue that this was what they were doing.

Yesterday's issue (Jan 1st) is absolutely chockas with stuff that confirms my suspicions. The cover itself is like a schematic diagram of several of these narratives and how they're related to each other. I'll get around to doing a blog post and/or video describing what I mean about that specifically when I find time. But for now I just want to show you one thing in the issue that really sticks out like (blue) dog's balls.

It's in the Sydney Weekend magazine in the Saturday Telegraph. It's the "Big Quiz" -- which I assume is a regular segment -- and it features Tom Hanks himself. 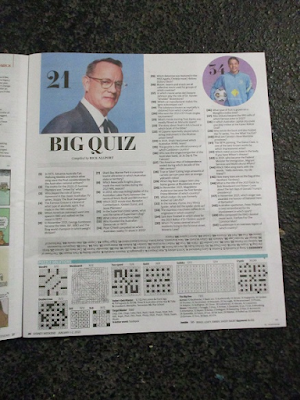 Firstly, I find it fascinating that he's seen here when he's been pretty much invisible for months on end.

This fact seems significant given the Ghislaine Maxwell guilty verdict. He was on the Epstein flight logs, remember.

Maybe there's something that needs to be secretly communicated to the local elites about the revered globalist figure? 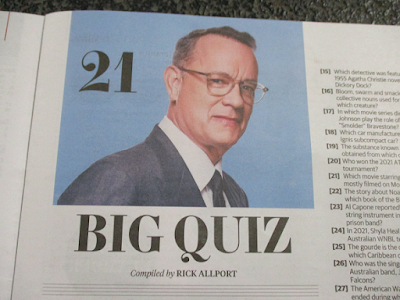 There's a photo of him in black and white. Secret society wankers love this duality theme. There's also a crossword below, which brings to mind the classic checkerboard flooring, an occult elite fave.

Then there's the title of the segment: "Big Quiz." Whoever's masterminding all this (I assume the editor or editor in chief) often combines headlines and images to create subtextual meaning. That looks like the case here.

So, why did they use his photo? What's the subtext? Well, he's a big star -- or at least used to be.

Or is it more specific? Are they saying he's like a "Mr Big"? Likely, I suspect.

Then there was his movie, Big. In that, he played a kid whose wish to become an adult somehow came true. So, it blurred the distinction between childhood and adulthood. On face value this seems benign -- but it all becomes pretty creepy when you consider what the A-list star has been accused of recently.

As the headline states, question 21 is the one about Hanks. 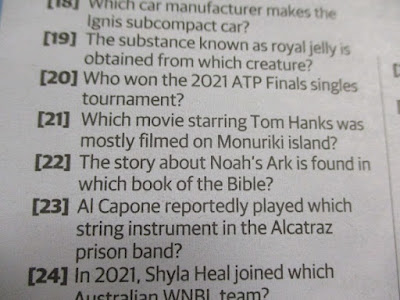 As you can see, it asks about a movie of his filmed on location. That was of course Castaway, which I suspected he was alluding to in that sinister snap from March 2020 when he included the words: "Washed ashore. Lost ashore."

I speculated that this iconic location, and the iconic figure of Hanks himself, were being used in combination for sneaky symbolic comms. I even made a video about this and related issues from that exact location. 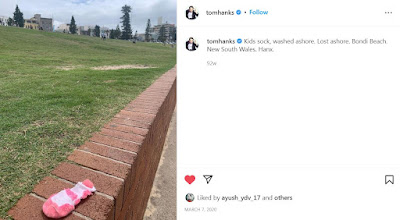 Now look at question 22. It's about Noah's Ark.

Well that's interdasting, innit? Noah's Backpackers in Bondi Beach, which is just near where he took that photo, has been in the news lately. You can actually see the path along the beach from the balcony. (Please watch the video embedded below, and you'll see what I mean. There are other data points included, particularly near the end.)

Not only that, I noticed patterns in the Sydney paper and elsewhere that seemed to allude to a contemporary Noah's Ark. But it had a very different cargo to the original. This was so noticeable I even made videos about them. And this was before the biblically named hostel was in the news -- for reportedly being the site of yet another outbreak of the dreaded 'rona. Yeah, suuure! (Just as a side issue, the current superspreader over in WA is a French backpacker. Well fancy that. What are the odds?)

This is slam dunk confirmation that the hostel and the photo are related somehow. I have a theory on what this entails that I might go into when I find time. Suffice to say, it's not good.

There are several other questions in the quiz that seem to hint at Hanks-related (white) rabbit holes. For example, you can see the question about what instrument Al Capone played in a band when he was incarcerated at Alcatraz. Answer: the banjo.

Capone was a Mr Big, right? And he ended up on an island prison.

Are they hinting at a parallel fate for Hanks? Those QAnon cultists have been claiming he ended up in Gitmo, remember. Maybe the crazy "conspiracy theorists" aren't so misinformed after all ...

There's a possible banjo link to Hanks, too. See, there's a theory that he was actually the one playing the instrument, or at least pretending to, in the famous scene from Deliverance, because the hillbilly kid wasn't convincing enough or something. You'll see it mentioned at the bottom of this page.

There are other questions in that list of 50 that could be related to the Hanks rumours. You'll see there's a question about a car. Lots of cars and you get traffic, right?

There's one about Wilson's disease. Hanks' character in Castaway created an imaginary friend out of his Wilson volleyball, which actually became covered in blood, and is reputed to be symbolic of some horrific act committed by the occult elite. (It's actually portrayed in toon form along with Hanks on the newspaper cover. But I'll get to that another time.)

There's also one about a famous painter of dancers. The answer is Edgar Degas. A quick online search about him reveals that as well as creating the sculpture "Little Dancer, Age Fourteen" he once said he had locked away his heart "in a pink satin slipper”.

There's another question about royal jelly and how it's obtained. Is this a reference to a certain notorious psychedelic compound that is supposed to be mythical but is actually real? 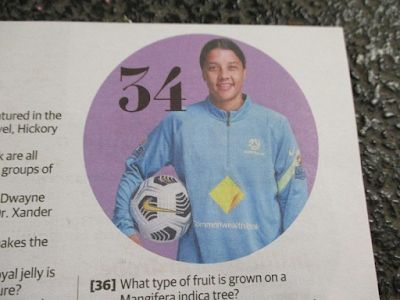 This drug, which is apparently pink in colour, is symbolized by a white rabbit, due to its molecular structure. It's also sometimes represented as a soccer ball for the same reason. And right there is a famous young soccer player holding a ball .. with a pink background.

Notice also the brand of the ball. It's not Adidas but Nike.

The global sports brand's catchphrase "Just do it" is reminiscent of notorious occultist Aleister Crowley's infamous exhortation to "do what thou wilt".

Nike was also linked to Luciferian themes when rapper Lil Nas X sold 666 pairs of their shoes that had been infused with actual human blood.

Sure, I'm doing lots of dot joining here. But again, it's not just after seeing a couple of weird things that could easily be explained as coincidence.

I'm speculating in this way after observing these patterns over and over again for months on end. They cannot be due to chance. They must be intentional.

The question is, what are they meant to convey? I think I'm warm with my theories but I welcome alternative ones.

I don't want to be right, TBH. So if you've got a benign explanation for all this then please leave it in comments. I'd be more than willing to consider it.

Posted by MattHaydenAU at 3:25 PM